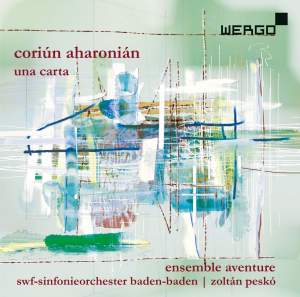 Composer Corun Aharonian (1940-2017) was of Armenian descent and lived and worked in Urugway to create a music born of a political dimension--his life was dedicated in resistance to fascist dictatorship. The result is a music more mestizo-conjoined than single-stranded identity-wise, a ritual unfolding of blocks of sometimes austere motifs that ritually repeat without conjuring danceful sequences. We hear a cross section of some nine of his works on Una Carta (Wergo 7374-2).

The first eight are chamber works performed by Ensemble Adventure; the final work "Mestizo" is for orchestra and features SWF-Sinfonieorchester Baden-Baden. Zoltan Pesko conducts. Each work assembles a universe of sounds that play themselves out in High Modernist cragginess yet often too includes one or more memorable melodic motives, at times in a vernacular of his life-locale, only abstracted, that contrasts with one or more different utterances of sound in dynamic interaction. The effect is original, modular, sculpturesque.

The orchestral "Mestizo" forms the climax of the program--both extraordinarily economic in the playing out of means of expression yet contentful in its linearity. It sums up what the first eight are about with a more spectacular palette of sound colors.

Repeated hearings reconstruct the sounds into striking semblances, as an unusual spoken phrase might gain meaning through rehearing.

Performances and sound are first-rate. Definitely recommended as another way to make New Music, an original, generally unheralded voice.


Posted by Grego Applegate Edwards at 4:09 AM