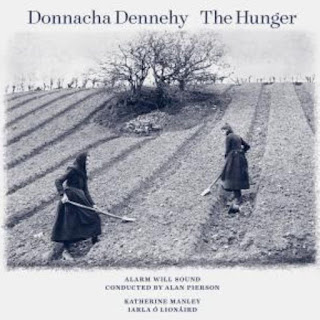 Composer Donnacha Dennehy gives us an undoubted masterwork in The Hunger (Nonesuch 075597925159), five harrowing vignettes on the Irish Potato Famine of the 19th Century (1845-52), which claimed a million from starvation and related disease, and another million through exodus and diaspora.

The music has a sort of Post-Minimal flavor which involves both a contemplative element and churning figurations almost fiddle-like yet original in themselves. The main "narrative thread" (quoting liners) comes from Asenath Nicholson's Annals of the Famine in Ireland, published in New York in 1851, quoting victims of the debacle, most notably Maire Ni Dhroma. In the present day situation we also have singer Citi Ni Ghallachoir contributing moving words on the death of a child. The five movements/interconnected vignettes starkly draw out a story line with dimensions of the disaster both harrowingly experiential and tragic.

This is the concert version of the work. There is also one for the stage. It is masterful, moving, phenomenal and landmark. It is tonal and very vernacular so to speak, yet it is not about quoting folk material and in the end establishes musical parameters that speak in very original ways, at times chant-like and ever earthy..

Words seem inadequate to convey the power of this work, its originality, its impact. One must experience it firsthand by listening.

I strongly recommend this one for a handle on our most Modern New Music output today, for a work that seems to me destined to influence us all and most certainly move us in the process.

Posted by Grego Applegate Edwards at 4:15 AM