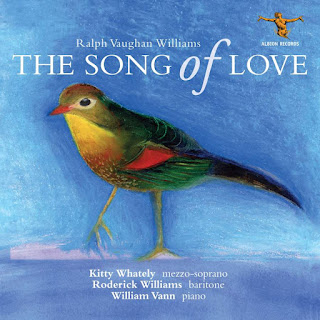 The art songs of Ralph Vaughan Williams? Albion and the Vaughan Williams Society continue their important work with a volume of Vaughan Williams largely early period songs (1897-1934) on the album The Song of Love (Albion ALBCD037). There we have quite respectable and even inspired performances from mezzo-soprano Kitty Whately, baritone Roderick Williams and pianist William Vann.

The songs epitomize Vaughan Williams' balance between form and expression, his love of folk themes, and his inventive. ever-fresh outlook on perhaps the most fickle of the muses. We who know his choral and vocal music at large should not be surprised to find his abilities on equally happy display for the songs presented here.

Any lovers of Vaughan Williams will be well served by this program, as will those Anglophiles and connoisseurs of the Modern Art Song. Kudos to all involved.
Posted by Grego Applegate Edwards at 3:59 AM