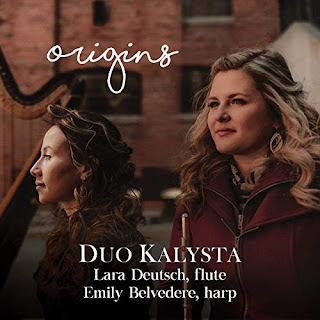 Canadian Duo Kalysta comprises the flute of Lara Deutsch and the harp of Emily Belvedere. They show beauty and stature on their inaugural album Origins (Leaf Music LM226), where four works come together well and we are transported accordingly.

The harp and flute fall naturally into Impressionist expressions so it is no accident that the program begins with Debussy's "Prelude a l'apres-midi d'un faune," which thrives in a duet arrangement by Judy Loman, edits by Nora Schulman. It is incumbent on the harp to articulate the entire orchestral texture but then with the sensuous quality of Ms. Belvedere's performance we hardly miss a note. Ms. Deutsch's warming flute articulations are a revelation. Marvelous.

In my tenure as an undergrad back so long ago now I was happily assigned The Tuning of the World by R. Murray Schafer--I most enthusiastically recommend you read it for a view of the sound universe around us. So it was only natural that I followed into his compositional output later on and I have been again happy in that. His String Quartets are a wonder (reviewed some time ago here. Look it up.) and now we have the three movement "Trio" (adding the viola of Marina Thibeault) "for Flute, Viola and Harp." It is a bit more Impressionistic than we might ordinarily hear from Schafer but then it is ravishing and deep so who would object? The music falls in with Schafer's idea of soundscaping, but even if you did not know that the music speaks with a flair and a somewhat ecstatic depth.

Jocelym Morlock (b. 1969) represents a somewhat younger Canadian compositional branch. "Vespertine" is in scalular relief and evokes continually. The meditative harp sets up a sonic field that the flute comments reflectively upon in the movement "Twilight." "Verdegris" counters with more consistent movement in the harp and limber flute counterparts. Lovely this is.

Andre Jolivet (1905-1974)  and his "Chant de Linos" for quintet brings back Thibeault's viola plus violin (Alexander Read) and cello (Carmen Bruno) for chamber music of some breadth and girth. The flute part is rather acrobatic at times and very well played.  It is a fitting and decisive end to an enlivening and absorbing program.

This is is music to savor, particularly if you are attracted to the flute-harp nexus like me. Bravo. Duo Kalysta and friends breathe life into these works with a joy and care that ring true.
Posted by Grego Applegate Edwards at 5:04 AM