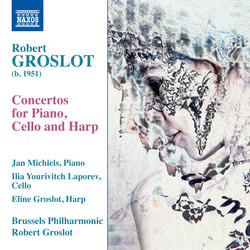 The concerted work is alive and well on the contemporary music scene. Perhaps that is in part due to how the kernel of the form is simple--a showcase for a particular instrument, instruments and/or orchestra, and perhaps at least a little etude-like demand on the soloist(s), though that does not always hold true.

We get a good gauge of the health of the form with a recent release of Concertos for Piano, Cello and Harp (Naxos 8.579057) by Robert Groslot (b. 1951).. The three concertos were written between 2010-2011; the Cello and Harp Concertos enjoy World Premiere Recordings here. Each work has a commanding solo part of some difficulty yet the orchestra assumes a critical role in the thematic-structural unfolding as would be expected.

Performances are first-rate, with fine results from pianist Jan Michiels, cellist Ilia Yourivitch Laporev and harpist Eline Groslot along with the Brussels Philharmonic under the composer.

The music is in a Middle Modernism mode, which is to say that there is no mistaking melodies or harmonies as coming out of Romanticism, and there is attention to form and overall unfolding somewhere in a lineage from Bartok and the less rigorously serial Dodecaphonists--abstract but not radically so, in other words.

Groslot has written a score of concertos to date, for some 18 or so instruments plus orchestra. This album is a second in a series of such for Naxos. I have not had the pleasure with the first, but this volume I do find quite absorbing and substantial.

The liners talk of his intuitive yet logical approach, based on the overtone series, his influences from the 12-tone school, without necessarily utilizing tone rows, although that can also be the case.

Each of the three works are distinguished and well worth hearing and even savoring. Groslot's inventive powers are high so that one does not have a deja vu feeling listening. Beyond that you should turn to the music itself and I definitely recommend you do.
Posted by Grego Applegate Edwards at 4:04 AM