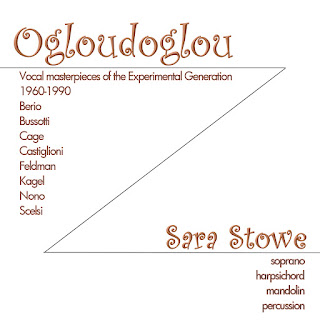 The art of High Modern vocals is special and very demanding. Soprano Sara Stowe shows us how to meet the challenge and excel on her anthology album Ogloudoglou: Vocal Masterpieces of the Experimental Generation 1960-1990 (Metier msv 28593).

Sara performs for us some 11 Avant Garde vocal works, four by Giancinto Scelsi plus a representative work each by John Cage, Sylvano Bussotti, Luciano Berio, Mauricio Kagel, Luigi Nono, Niccolo Castiglioni and Morton Feldman. In other words she covers a good cross-section of important voices of the later High Modernist generation and. most importantly, she follows all performance instructions and aesthetic demands for a result which wears well and does not seem at all contrived, which some vocal music can from this period if not done with heartfelt sincerity.

There is a fundamental musicality to all Ms. Stowe undertakes so that her readings do not evoke that "fight or flight" "fire"-yelling-in-a-crowded theatre equivalent. I've suffered through some such readings in the past but very happily Ms. Stowe is a true artist and so each realization convinces and captivates.

A high point of the program occurs about 3/4 of the way through when we encounter Kagel's "Recitativo for singing harpsichordist" followed by Nono's 15 minute "La Fabbrico Illuminata for voice and tape" both continuing a breaking up of a string of solo vocal pieces that are ingenious for sheer possibility and put Ms. Stowe through some challenging performance demands. Scelsi's title work makes the initial break from solo vocal works and calls for percussion and voice, and the program ending "CKCK" by same for mandolin and voice. The Cage and Berio works are essential fare as well.

But truly it is the total sequence after a number of listens that impresses. What a wonderfully creative period was the late High Modern age and what a fine job Sara does in presenting it to us. There can be traces of vernacular folk, a relation to a classical vocal past, chant, textual orientations, sound poetry, a bracketing of everyday vocal outpourings,  and exercises in sculpting through the voice. The only rule is to be daring when possible and overturn shibboleths when plausible? Yes, I think so. Every experiment implicitly tries to circumvent the expected surely. That was a mark of the times.

This may not be for everybody since you must have an open mind to appreciate it. Those who listen with a marked receptivity are in for a real treat! Bravo! Stowe is masterful! An age is captured nicely.
Posted by Grego Applegate Edwards at 3:53 AM