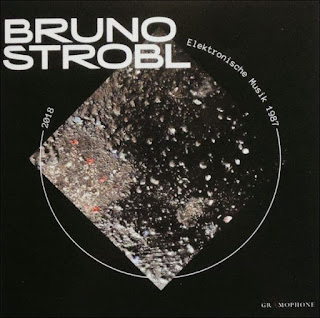 Austrian elecroacoustic musical master-poet Bruno Strobl brings his own sound to our ears on the retrospective album Elektronische Musik 1987-2018 (Gr Mophone A00011). Some six works span the 32 years with a personal resonance in the best tradition of Musique Concrete, yet with an intrinsically sound-ground breaking demeanor.

All works are notable for how they create a palpable flow within their musico-sonic syntax. Each is a world unto its own with its own sound fingerprint. So we have transformations of splitting wood with an axe on Hiatus (1987),  of the sound of the contrabass on weiter, weiter, weiter - Transformationen (2018), glasses ringing on GlasSkizze (2000), double bass and synthetic sounds on Gesselkopf (2017), water sounds & etc. on Archeton I (1992) and more doublebass on Visby 01 (2012).

There may be an occasional overlap in sound class with earlier electroacoustic composers, but by and large it all is stunningly experimental in the sense of NEW. So the same reconnected-to-soundlife feeling one might have had listening to Henry, Schaeffer, Ferrari, Stockhausen. Mimaroglu and the like can be had here again as a sort of "new deja vu" where the newness is the repetition element.

Anyone who appreciates the electroacoustic arts or those seeking to experience it would be well served by this album. Bruno Strobl may not be a name and an artist widely familiar farther away from Austria but he deserves hearing and recognition. Give this a listen!
Posted by Grego Applegate Edwards at 3:57 AM