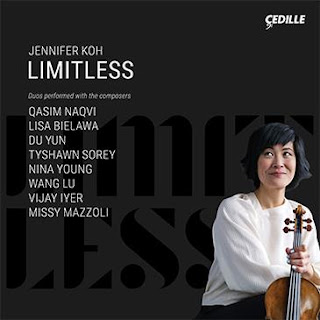 Violinist Jennifer Koh performs duos with eight lively composers on the two-CD set Limitless (Cedille CDR 90000 191). In the process Ms. Koh's indefatigable enthusiasm for, and extraordinary interpretive prowess in cutting-edge Modern New Music comes to us with dazzling light throughout.

The intersection between performativity and templated structure is key and so too then the nexus between the idea of a Modern Classical and a Modern Jazz. The presence of new Jazz luminaries Tyshawn Sorey and Vijay Iyer gives us a wider-than-usual indication of the importance of the performance stream and the music bears it out, for the music is in-the-moment as well as structurally advanced.

Each segment brings forward a two-way intimacy between Ms. Koh and her composer-contributors for seven world premier recordings of works plus two newly recorded versions of things by Mizzy Mazzoli.

Qasim Naqvi heads off the program on modular synthesizer for "The Banquet," a moody atmospheric work.

Then comes soprano Lisa Bielawa and her quixotic "Sanctuary Songs," three examples with the third bringing in a choir in very memorable ways.

Du Yun combines some pyrotechnically vibrant and individualistic vocal immediacies with Jennifer's violin on the expressionistic "Give Me Back My Fingerprints."

Jazz master percussionist Tyshawn Sorely adds glockenspiel to his "In Memorium Muhal Richard Abrams." The piece flows with long-toned periodicity in ways that engage and fascinate.

For the ending of CD1 Nina Young appears on synthesizer for her "Sun Propeller."  There is a multi-layered soulfulness to this one and Ms. Koh's violin wins the day with decided conviction and multiplied heft. The title refers to fanned sunbeams.

The second CD gives us two multi-movement works and two shorter ones.

Wang Lu and her electronics grace "Her Latitude." What sounds like Tibetan Buddhist chant sets up the opening backdrop along with air-raid sirens and it goes from there as a kind of musical equivalent to a Koh biography. Ms. Lu responds at times improvisationally to Jennifer's violin. The entire piece has an aural, concrete and holistic logic that is beyond words, always vivid, while the elctronics combine "spiritual calm and catastrophic unrest," according to the liners. You can hear that, quite effectively so..

Jazz piano giant Vijay Iyer appears on the 88s with Jennifer on his four movement "The Diamond."  There is a wealth of brilliance in a sort of "grand tradition" expansion of violin-piano synergies and energized rhythmic vitality. The fourth movement features an especially Jazz-ish feel and it's all good. Very beautiful music!

And finally we have two Missy Mazzoli cameos with her on piano and electronics for "A Thousand Tongues" and "Vespers for Violin." The first is ravishing; the second as well--and both are haunting in their cohesive spectricity.

I merely brush the surface in my words about this set--for the listening itself brings you up against a massive burst of violin-plus exploratory excellence, brings you in contact with a closely kinetic set of duo pairings where mutually illuminating doubled performances and compositional innovations join hands to say something very worth saying, on the edge of an ever-new Modernity. Bravo to Ms. Koh, her superb artistry and aesthetic courage, and bravo to her fine collaborators. This is a sleeper in a way but most definitely a milestone in its daring. Listen!
Posted by Grego Applegate Edwards at 4:50 AM