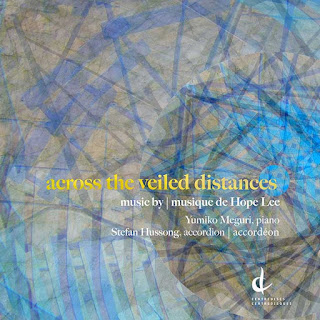 A select collection of piano music spanning nearly four decades (1979-2017), Across the Veiled Distances (Centredisques 27219) gives to us some five thoughtful and very pianistic works by Hope Lee, who deserves our attention as an accomplished voice on the New Music scene. A sensitivity to touch and timbre marks the music out, and as the one-sheet that came with the CD notes--it.conjoins an ancient Chinese musical aesthetic with Modern piano sense and sensibility. That is if you listen for it. It is all about a special attention to aural space.

The clearly sensuous facticity of part articulation is given palpable creative thrust in the readings here by excellent exponent Yumiko Meguri, a pianist of decidedly high caliber with great sympathy to Hope Lee's poetics of piano gesture.

She is joined by no lesser an artist in accordionist Stefan Hussong for the duet "Imaginary Garden V renewed at every glance" (2017). It has drama and bite, torque and some mystery. As the interactions proceed the level of invention remains high throughout.

The solo piano works are all concentrically riveting in their own ways, each of a piece yet showing Hope Lee's wonderfully varied intimacy with, and profound affinity for the pianoforte at its expressive best.

The final work, "...reflection on recollection" (2015) has lots of fire to it and epitomizes the program as a whole. But of course the point of the trip is in its traversing so we can gain just as much as we listen closely to the other solo piano works "across the veiled distances" (1996) and "Dindle" (1979) as well.

This is an ear-opening and well-performed New Music piano session, a highlight of the year! If you resonate with the piano and the Modern this one is essential and lively. Listen by all means.

Posted by Grego Applegate Edwards at 8:09 AM