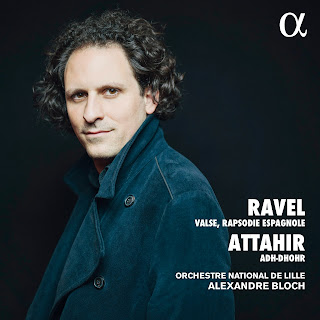 A very French program bursts forward with the very exacting but poetic conductor Alexandre Bloch and the dynamic, disciplined forces of the Orchestra National de Lille. They embark on an ambitious program here that includes Ravel mainstays La Valse and Rapsodie Espagnole, plus Benjamin Attahir's Adh-Dhohr, Concerto for Serpent and Orchestra (Alpha Classics 562).

In a short but revealing interview in the liner notes to this album conductor Bloch notes the very French goals of both composers in these works as "clarity of sound timbres, exacting rhythms, and a balance between the different instruments." while Maestro Bloch relatedly stresses that he and the orchestra seek to attain "clarity of sound, rhythmic precision, and care for detail." All that rings true in these works and their performances on the program.

In fact the two Ravel pieces come across as nothing less than magical. The "Rhapsodie Espagnole" never sounded more Spanish, colorful and atmospheric. "La Valse" sounds characteristically elegant yet brooding, insightfully moody and in the end manically possessed. Hue and definition are at the forefront indeed as is the most exacting of poetic detail. These are performance that rival the very best.

Composer Richard Attahir (b. 1987) complements Ravel with a work of definite Modernist newness yet within that special French orchestral tradition. The serpent itself is a kind of woody burnishment,  a naturally intonated, mellow sound like a French horn only not brassy. The integrated solo and orchestral interplay on "Adh-Dhohr" amounts to something fine-hewn yet boldly robust. There is decided drama in the score and performance, a very modern tang with orchestrational brilliance and a tightly scripted dialogic resonance.

It is a singular work that carries with it a lucidly French musical syntax, ranging into a territory marked off as Attahir's. The performance is both spectacular yet subtle in its great concentration of musical depth. The music warrants the attention and rewards with a fascinating hard-edge juxtaposed with journeying passages that give evocative direction and a palpably cohesive-creative tension to the whole.

This is a fine program, with wonderful performances of the familiar, the unknown and ever the very French. The Orchestre National de Lille under Alexandre Blioch is a phenomenal thing that one should not miss! Highly recommended.

Posted by Grego Applegate Edwards at 3:49 AM