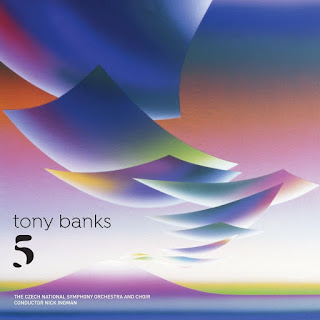 Founding Genesis member and keyboardist Tony Banks helped create the influential Prog Rock group's special sound. When the band called it quits he had already begun to immerse himself in work on film scores, solo Prog projects, and in 2004 released Seven, his first album of classical orchestral compositions.

According to Wikipedia, Bank admires Ravel, Rachmaninoff, Vaughan Williams, Sibelius and film composer John Barry.  The music of Five reflects something of these influences, albeit obliquely.

Each of the compositions are single-movement oriented and moderately short, clocking in at between nine and 15 minutes-long each.

Banks plays piano and celesta throughout, as a member of the orchestra more than as a concerted soloist.

The music is affirming and epic, anthemic and thematically, lyrically ultra-melodic as befitting the kind of Prog that Bank and company put forth on the iconic Genesis recordings. Any one of these five works would serve as a fitting part of a film score, without a doubt. None of it is fluff but it does not cry out either as New Music with a capital /N/. It is pretty and at times stirring but it does assuredly not have a Modern slant to it so much as it is kind of in the side pocket of Prog Rock.

For this outing Banks came up with a composition-realization scheme rather unusual and new for his classical-output production. Essentially he initially worked out all relevant parts on piano in the form of recordings which Nick Ingman then transcribed, orchestrated and arranged in consultation with Banks. Each section of the orchestra and the soloists recorded their parts separately and the orchestration-arrangement was subject to further amendment and modification "on the fly" as it were, as they immediately heard the results for each tracking session. In this way the finished recording is virtually as thoroughly a Banksian realization in the orchestral realm as possible, one might say.

Having not heard either of the previous classical Banks albums I cannot comment on how Five differs from them. I base my reactions solely on this album, and it is generally positive as to what this is all about.

There is much music to sink into, enjoy and appreciate if you set about listening with no ordinary preconceived expectations as to what this "New Music" should be. Specifically when you hear it for its roots in the Prog realm Banks comes out of and helped after all to create, you go a long ways toward understanding and hearing it through the the ears of the composer. As Prog Orchestral, that is, if I can be permitted to coin it such.

Recommended especially for those into the Banks-Genesis legacy and/or otherwise generally a Prog fan.
Posted by Grego Applegate Edwards at 5:28 AM