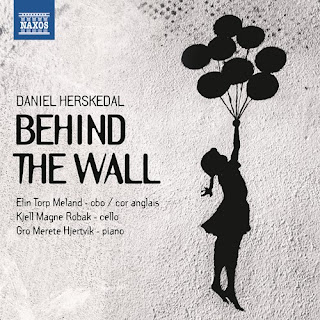 European composer-instrumentalist Daniel Herskedal comes to our ears with his eight-movement chamber work Behind the Wall (Naxos 8.574189). It is a kind of impression of Mid-Eastern life and culture, most specifically as viewed through vignetted musical movements centered around the Palestinian town of Ramallah. It draws upon Daniel's travels through Syria, Palestine and Lebanon and in its own way musically synthesizes the heritage of that region with Herskedal's own musical heritage and contemporary outlook.

The musical idiom is tonal, at times Neo-Minimalist and lyrically POMO Modern with perhaps a dash of what one might term the "ECM sound" in Jazz, though this is not about improvisation. There are some nice ostinatos and some stirringly, rhythmically heightened sonances that with originality bridge into the region while still keeping a hold on Contemporary Euro-American parlance. Or so it seems to me.

An astutely performative trio appears before us to give life to this music. It is Elin Torp Meland on oboe and English horn, Kjell Magne Robak on cello and Gro Merete Hjertvik on piano. They are nothing less than superb in their reading of this score, interweaving Mideastern and Western influences adroitly, for example adopting (in the oboe) at times Mideastern tuning colors. They consistently realize other scored brightnesses with a sureness and interpretive acumen that deserve a hearty bravo.

And as for the music? It is multifaceted yet seamless in its lyricism. A Mideastern and ethnic-Minimalist drive alternate with a reflective wistfulness, in sum giving to it all real character and identity decidedly contemporary yet in many ways almost timeless.

There is a contentful thematic abundance which ever steers it clear of a merely pretty New Age-ist sort of pandering. Yet at times it IS very pretty, beautiful in its way and filled with decidedly well-wrought trio interplay.

The experience of this music naturally goes beyond what words might capture. Like the Tony Banks album yesterday, it too forges a classicism with elements not all strictly within the Western Classical Canon, and succeeds quite well striking a silver spade into earth not precisely new, nor precisely old. Earth is like that.

It's a rather ravishing bunch of music that will beguile anyone musical given half a chance. It may be beyond category per se, but nowadays things of this sort form a category that would have been unknown in, say, a 1955 Western discussion for the most part. So listen to this and you may well be entranced at the outcome.


.
Posted by Grego Applegate Edwards at 5:04 AM