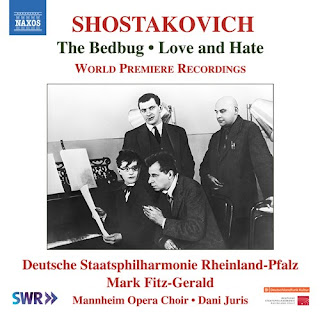 The present release contains some obscure but winning Shostakovich in World Premier Recordings. The first work comes from the early period (1929) and consists of incidental music for Mayakovsky's comedic play The Bedbug (Naxos 8.574100). The second is a reconstruction of the full soundtrack to Love and Hate, a 1935 film directed by Albert Gendelshtein. Mark Fitz-Gerald utilizes the original piano reduction and the film soundtrack itself to create the whole once again in a new master score.

Fitz-Gerald conducts the proceedings with the Deutsche Staatsphilharmonic Rheinland-Pfalz and as needed the Mannheim Opera Choir under choirmaster and assistant conductor Dani Juris. The results are very good indeed.

The Bedbug comes alive as an avant farce where party functionaries and the bourgeoisie alike are targets of Miakovsky's sarcasm. The music reflects the play undoubtedly and has musical interest on its own here as well.

Love and Hate is set in a village during the Civil War in Russia, 1919. It did not get much in the way of popular or critical acclaim yet the soundtrack is a notable advance for Shostakovich into the middle period of his Symphonies 5 to 12, as the liner notes to the recording attest.

Both scores are in some ways the Russian equivalent to Weill, ironic, boisterous and popular-music influenced at times, always in a rather rough-and-ready, rough-and-tumble mode. So we hear humorous gallops, bittersweet waltzes, folk-pop ditties and more besides, all of which sound quite Shostakovichian once you get used to it all.

This music should be of great interest to those already familiar with the composer. These are by no means flat-out masterpieces, nor are they the least bit tedious. Nonetheless those unfamiliar with his music might sample some of the symphonies first, for example the 7th, which I reviewed a recording of here recently (see index box above for that).

Give this a listen if it sounds interesting to you..

Posted by Grego Applegate Edwards at 3:53 AM