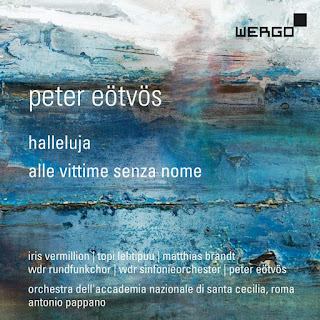 Peter Eotvos is a living composer of high ambition, as shown in the latest recording of his Halleluja - Oratorium balbulum along with his Alle vittime senza nome (To the Nameless Victims) (Wergo WER 7386-2).

In the most general terms his ambitions are centered here on two works that provide a kind of meta-commentary on the work as a saying, a creation of meaning in text (extant or implied) as well as sound, this especially in the main work on the program,  Halleluja.

The latter begins with the idea of the Hallelujah or Jubilus portion of the Latin Mass as originally one long melisma on a single syllable and the subsequent contribution of poet-composer Notker the Stammerer (Notker Balubus) (ca. 840-912) of a wordful text to this segment. Eotvos' oratorio is a stammering one, as a kind of nod in the direction of verbal loquaciousness which is simultaneously, in contradiction tongue-tied, and of the present-day difficulty of rejoicing in a world full of trouble and deconstruction.

Literally in Hebrew the hallelujah refers to a song of praise. Eotvos conceives of such here as a babble, where deep meaning may forthcome only to disappear in a sea of incoherence, where the hope rests ultimately in the music more than the meaning of the words.

Thomas Meyer's liner notes dive into the myriad complexities the work entails and I do not wish to reproduce them here so much as point to their main thrust. Eotvos questions the very premise of the work, an oratorio that tells the story of the hallelujah-saying and the very difficulty of rejoicing today.

In the process, the narrator, soloists, choir and orchestra transcend the impossibility of what they do by doing it wonderfully well musically, covering a Modern perspective while making allusive quotations from a long history of music-rejoicing-praise, or passages that otherwise form a historical-musical commentary in the midst of a Modernist matrix.

The instrumental-orchestral Alle vittime senza nome that follows is equally important, a kind of non-requiem, or an indirectly allusive requiem to the countless African and Arab refugees who have perished while making a desperate attempt in overcrowded boats to reach refuge at safe harbors in Italy. It was a commission from Orchestra dell'accademia nazionale di Santa Cecilia, Rome, who perform it with conviction under conductor Antonio Pappano.

This is a somber and haunting work, as indeed is the Halleluja. Kudos in the latter to the soloists, and to the WDR Rundfunkchor and Sinfonieorchester under the composer's direction, who make moving and coherent the very idea of a loss of cohesiveness. It is perhaps ironic but nonetheless true that this work forms lesser an experience to the German language challenged than it would if one knew German well. Nonetheless for those who are not so prolific we get the idea by careful listening and the detailed liners. The music is a triumph, regardless.

I recommend you explore this fine, eclectic yet original grouping to get another bead on Modernism today. Hurrah. Music triumphs in the face of its impossibility.
Posted by Grego Applegate Edwards at 4:32 AM