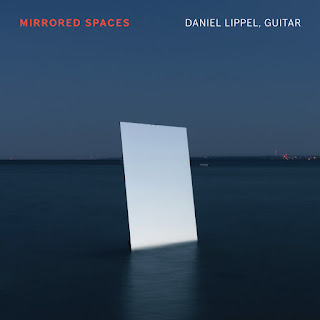 Some albums have such a voluminous and well-defined yet complex conceptual framework that doing justice to it all within the limited time and space of a blog article seems daunting. Such a release I feel is most definitely at hand with virtuoso New Music guitarist Daniel Lippel and his two-CD album Mirrored Spaces (New Focus Recordings FCR239).

The idea of Mirrored Spaces took shape initially in a Lippel guitar concert of 2008 that forwarded three "Experiments in Co-Composition."  which to varying degrees involved a compositional collaboration between performer (Lippel) and composer (others, Lippel). The present album expands the idea to a richly varied tapestry of works, including the original "Mirrored Spaces," "Descent," and "Scaffold" by, respectively, Orianna Webb and Lippel, Ryan Streber, and again, Daniel Lippel.

From there we hear another nine single- or multi-movement works here, all stemming from the collaborative idea and benefiting greatly from it.

The entire program, as Daniel states in the liners, makes metaphorical use of the idea of mirroring in our "appearance driven culture," with collaborations that give an alternate mirroring centered on the sound qualities and potential of the guitar, "its electronic doppelgangers," plus structure, progammaticity, history and usage of materials. Underlying this are factors regarding special tunings (scordatura), microtones, electro-acoustic aesthetics and the extended voice of the electric guitar.

Such concerns, taken all together, animate and inform the music yet too the results are quite a bit more than the sum of these conceptual parts in that the excelling comes out of the compositional-performative doing. That of course is how it always must be, nonetheless what is remarkable about this program is the how as much as the what.

From the first listen I was taken with it all. The works for electric guitar especially caught my attention because I have long thought there was great potential in an electric-New Music nexus. So the retuned electric springs forward dramatically in works by Sidney Corbett ("Detroit Rain Song Graffiti") and Ryan Streber ("Descent"). A live recording of Lippel's "Scaffold" is another great example of the electric and special tunings along with sustain worthy of the classic psychedelic guitar tradition. Note should also be made of Ethan Wickman's "Joie Division" and how it relates nicely to the electric idea with a combined acoustic part and simultaneous electronic counterplay. It is fascinating and dexterous, truly. There are many other gems too numerous to mention.

All of the program is fascinating and musically rich, showing great inventive and performative imagination, locking in a way of thinking about New Music and the guitar in a single breath, with a wide breadth for today (pardon the phrase). The collaborative idea indeed pays off with guitar-centric advancement that is informed by Lippel's intimate involvement with the instrument and the creative impetus of the composers to spur forward what the contemporary situation can give us.

It is a tour de force for an appealing and intensive synergy between the guitar and the latest compositional Modernisms. Hurrah!