Peter Greve, The Palace of the Dreamking and Other Works 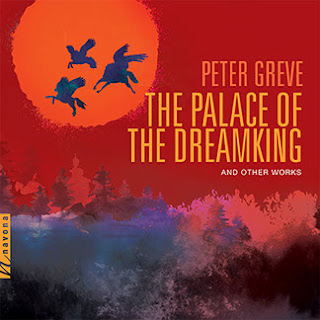 Netherlandish composer Peter Greve (b. 1931) does not belong to the famed inner circle of New Music luminaries. In part that is because until his retirement in 2003 he pursued a career outside of music after studying music intensely yet also obtaining advanced degrees in Chemistry.

The release of an anthology of his music, The Palace of the Dreamking and Other Works (Navona NV6257) should help introduce him to those that follow the contemporary scene.

It gathers together performances of six works, some recorded especially for this release, others recorded earlier, all sounding first-rate.

The style of the Peter Greve music we experience here might be termed eclectic Modern, advanced tonal, covering a fairly well populated turf some distance away from the most edgy music but convincingly sincere and Greve-like, no mistaking that. He has had enough, quite enough musical training that one would never view his composition as in an "outside art" zone, yet there is a kind of disarmingly personal aura to the music that while not being wayward is nonetheless determined to be going in a certain individual way.

There is a good mix of ensembles to be heard on the program.

The title work, a symphonic poem for large orchestra, has a programmatic scenario the music seeks to portray for us, about an old Dreamking and his musical and personal antics. It has resonance and memorability. It is not my favorite work here but it does give us a dramatic introduction to Greve, certainly. He shows a sure orchestrational sense and a widely dynamic point of view here.

The following "Partita for 11 Brass Instruments" changes the scene to move towards more abstract territory. There is invention and dynamics in full supply, happily three movements of it. The middle section hearkens to an earlier time when brass choirs and Gabrieli ruled, then the music returns full force to the present-day. Lovely.

"Give Us Peace," an "Invocation for Organ and Mixed Choir" proceeds through eight movements with the organ in a mystic yet triumphant mood and the choir further coloring our ears with searching harmonies and evocative poetics. A French organ school sense of symphonic drama and some very advanced expressive harmonies rule the day nicely. This is a high point certainly.

The "Trio for Clarinet, Violincello and Piano" gives us the chamber side with a well wrought reflectivity contrasting with kinetic movement through the three segments. The level of invention is high and the musical territory covered feels dynamically right on repeated listens. The work was commissioned by Greeve friend Maartin Van Veen in remembrance of his wife Mary, who suddenly died after their 50 year marriage together.

Next up is "Magic Winter," an "Arctic Saga" here in its string orchestra version. It settles into various ramifications out of a mythical tale of trolls trying to brave out a tough Scandinavian winter. It moves through story-painting moods in an almost Grieg-like manner, depicting a brave endurance against a harsh season..

An "Aria for Trumpet and Organ" finishes off the program with lyrical mystery and songful expression.

And that is the program in a nutshell. Greve has a winning way that he makes his own and if it is doubtless not the sort of thing that would lead us into some drastically new stylistic age it is nonetheless fine music. Greve gives us his best and that is very good indeed. Recommended for those seeking new music beyond the typical labels and into the sounds and sensibilities themselves. This may not be the music of the future but it is some of the better music of the present. And it's worth your time should you seek the new and have the room and time for a rather unknown, unsung voice today. He deserves a hearing.


Posted by Grego Applegate Edwards at 5:17 AM