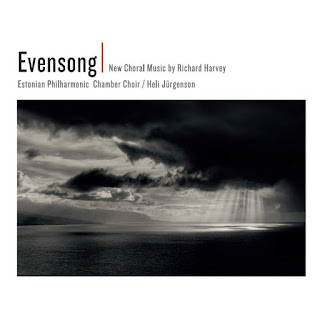 Richard Harvey writes very tonal choral music with a lyrical bent, an ambiance and either a strongly song-like expressive demeanor or alternately old-in-new reworkings of the atmospherics of earlier sacred music tropes, not to mention a place decidedly in-between.

It is fitting that his album of new choral music, Evensong (Altus Records ALU0018), is well performed by the Estonian Philharmonic Chamber Choir under Heli Jurgenson because there is an Arvo-Part-like affinity to this music in its outlook if not necessarily its ultimate sound, and of course Part hails from Estonia.

My favorite piece on this ten-work anthology is "Et in Arcadia" which sets out a soundscape replete with a Tuva-like throat overtone whistle and mysteriously compelling choral dynamics. There is a more straightforwardly ringing-singing "A Prayer" of true beauty, a nice version of the old Christmas carol "Lullay," the Early Music influenced, old-in-the-new "Credo," and the soaringly reflective title cut "Evensong," with its Kyrie Eleisons. There is much variation within Harvey's ethereally centered approach and we hear it nicely in this program.

The performances are absolutely spot on and convey the music with every nuance. Another take on the Post-Modernism of the present day comes through with this, Richard Harvey's moving program. We have a new voice, new to me, a fine voice indeed. Listen to this one!
Posted by Grego Applegate Edwards at 3:27 AM