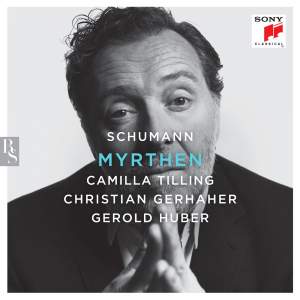 Where art song and lieder are concerned Robert Schumann is second only to Schubert as a principal exponent yet he wrote next to nothing in the medium until his marriage to Clara Wieck. The floodgate was opened then as he composed over 140 songs in that year alone, many of his best and most popular, including the cycle Myrthen (Sony Classical 19075945369) which he presented to Clara in 1840 on the eve of their wedding and later published in four volumes.

I am happy to have the chance to hear and write about a new recording of the complete opus as sung beautifully by soprano Camilla Tilling and baritone Christian Gerhaher, with Gerold Huber accompanying on piano.

Gerhaher in the liners to this album summarizes the flow of poetic thoughts and feelings that make up the four books of the cycle, the first encapsulating the "personal and gender specific attributes" of the couple individually, the second telling of the couple and their lives together, the third dealing developmentally with the personal goals of Clara and Robert and the fourth bringing together "the many interests, obligations and difficulties with the reciprocal affection" which was the basis for their bond.

All that would mean little of course if the musical expression in each song was not at the high level that persists throughout the 26 songs that make up the cycle. That is very much so and happily Tilling and Gerhaher give us tender and ennobled performances that affirm the vocalists' stature as among the very greatest of living lieder interpreters. Kudos must go out also to pianist Huber as an ideal accompanist.

I come away from deep immersion in the full cycle with a firm conviction that we tread on rare artistic ground throughout. Myrthen in its entirety as sung by Tilling and Gerhaher forms a must-hear cornerstone, a state-of-the-art foundation offering to the vocal arts today. Strongly recommended.

Posted by Grego Applegate Edwards at 3:47 AM