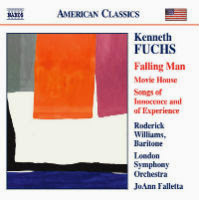 Anyone living life around New York especially will no doubt recall exactly what they were doing and their experiences on the morning of 9-11. Those outside the immediate area will do the same, but perhaps with less of the kinetic shock those nearby felt. It was a horribly defining moment for many of us, a moment that changed everything one way or another, for some a loss of personal innocence, a rite de passage into an afterward at least initially of twilight and loss.

Composer Kenneth Fuchs has come to terms with this via Don DeLillo's novel centering around the tragedy and its aftermath, Falling Man. Fuchs has composed a number of works based on the theme, but now we get to experience the principal one, aptly titled simply Falling Man (2009-10) (Naxos 8.559753), for baritone (Roderick Williams) and orchestra (JoAnn Falletta conducting the London Symphony Orchestra).

It is a moving work that sets to music the opening passages of DeLillo's novel dealing directly with one man's experience on the streets during ground zero. The baritone describes the horror of the scenes the character witnesses while the orchestra comments mournfully but even somewhat mysteriously, as in a dream, the unfolding of those moments.

It is a masterful work, in its own way a kind of analog to the Hindemith-Whitman work "When Lilacs Last in the Dooryard Bloom'd", on the horrors of the Civil War and the death of Lincoln. Both are requiems in their own way. Both filter the immediacy of the horrors through a mediation and meditation of poetics, music and memory.

Roderick Williams gives us a definitive performance that is seconded by the greatly poetic reading of the score by Falletta and the London Symphony.

Companion works on the disk contrast well. Both are also for baritone--and a pared-down chamber ensemble. The first, "Movie House" (2007), gives us a number of poems by John Updike that evoke vividly the optimism of the '50s. Concluding the disk is "Songs of Innocence and Experience" (1977), an earlier work based on the William Blake poems, including of course "The Tyger". Both remove us from 9-11 by moving back in time, two other eras with their different moods, and in a way to Blake summing up the process of knowing what one knows (or intuits) after the loss of innocence.

Would I personally have set "The Tyger" in the way Fuchs does? No, but it works anyway. Fuchs was just setting out and the mood he sets for the poem is perhaps a bit more innocent than it would have been had he done it right after 9-11.

This a mere parenthetical comment. The three pieces work exceptionally well together regardless. Fuchs is in every way a fully developed composer-personality of today. These three works in the masterful hands of Falletta and Williams, in the carefully dream-like performances of the London Symphony Orchestra, come through as works we can ill afford to ignore.

Kenneth Fuchs sums up something about being alive right now in the three works taken together. He speaks to our age as a direct contemporary, neither overstating nor understating, bringing us a very musical-poetical portrayal of where we have been and where we are.

On that basis I would say that this disk is pretty near indispensible for those wanting the new music as it lives for us right now. Kenneth Fuchs captures that, and thanks to the beautiful performances we can live inside of it here, as we live the aftermath of what came before.