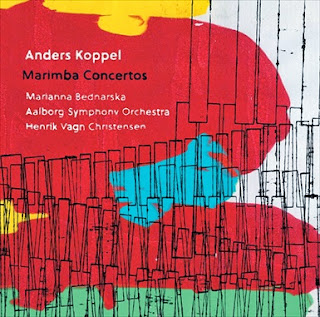 One hundred years ago the marimba was very much a rarity in classical music. Nowadays it is a staple of many percussion sections and an important member of some chamber ensembles. There are also solo pieces and concertos. Probably nobody else has done as much for the marimba concerto as composer Anders Koppel (b. 1947). There are four concertos to date, all of which can be heard on the recent volume Marimba Concertos (Da Capo 6.220595). Marimba soloist Marianna Bednarska joints the Aalborg Symphony Orchestra under Henrik Vagn Christensen for Concertos 1-4 plus a short two-minute cadenza "P.S. to a Concerto."

Koppel's music is filled with lively strait-moving momentum. Tonality is a key feature but not especially neo-anything as much as contemporary. There are slow movements here and there and a general emphasis on memorable virtuosity in the marimba part. The orchestra essentially appears mostly in a supporting role, with counterparts and thematic roles almost always in direct complement to the intricate marimba parts. The concertos are all rather recent, having been written between 1995 and 2006. They sound as fresh as they are.

Marianna Bednarska does a great job as the soloist, giving us performances with the dash and flourish one might expect. She is nearly always in motion and it is clear she was thoroughly prepared to shine as she does. The orchestra does a fine job as the perfect foil and contrasting voice in the music. There are times when the music has almost a rock feel, other times the motion suggests Asian and African and of course European elements, but all of it has an unmistakable Koppel imprint to it.

It is most essential listening for anybody with an interest in the marimba in contemporary music. But it is quite engaging and enjoyable in its own right.