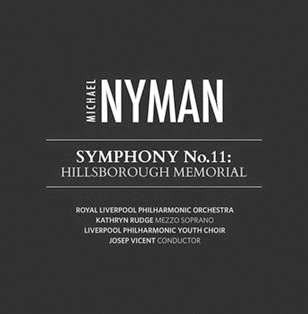 English composer Michael Nyman has an enigmatic way about him. Every work seems to bring something unexpected to your ears. The result, for me anyway, is that there are works of his that hit me very squarely in my pleasure zone and others that do so less. It is not something that I could explain easily (especially on a Monday morning) except to say that he sometimes combines high and low and that in itself does not have directly to do with my reactions, but it is sometimes the way he does it.

Today's work holds together beautifully, for all the right reasons. It was written off and on as Nyman was composing music initially unrelated but in the midst of it all he dealt with the shock and grief following the soccer massacres of Liverpool fans in Brussels in 1985 where 41 died, and then the Hillsborough incident in 1989, when 96 Liverpool fans perished in soccer riots there.

Ultimately the music was variously transformed and added onto until this year when the Liverpool Biennial commissioned Nyman to expand the work into a fully fleshed out symphony for large orchestra, choral ensemble and mezzo-soprano. What we hear on the CD at hand is the full version. Symphony No. 11: Hillsborough Memorial (MN Records 136) gives us four contrasting sections, all coming to terms with the tragedy, in sorrow and a spirit of remembrance.

The first movement, "The Singing of the Names," features mezzo-soprano Kathryn Ridge in her role singing each of the 96 victims names to full orchestral accompaniment. It is movingly performed and written in such a way that the melodic thrust of the music, the intense and harmonically elaborate musical sequence, gives us all the feeling of grief at the senselessness. The three movements that follow are more minimalistic with repetitive structure an important element. They serve to keep both an expressive resoluteness and a mourningful sorrow alive and very much before our hearts and minds.

"Family Reflections" is the slow movement, dealing with the loss felt by the families of the victims in terms of tender anguish. It is long-formed with gently undulating repetitions in marimbas, etc., underpinning a long, winding string and choir elegy of definite beauty. "The 96" repeats a dirge like motif and the finale, "Memorial" has an unrelenting baroque-like progression that builds to a rather huge climactic outburst.

It is a piece totally worked out in harmonic tonality and as such looks slightly backwards to the sounds of classic and preclassic era requiems. Yet the intensity and continuousness of the music puts it into the post-modernist present.

Kathryn Ridge, the Liverpool Philharmonic Youth Choir and the Royal Liverpool Philharmonic Orchestra, all under conductor Josep Vicent, give us their all. A very committed performance as we hear on the CD makes the work come alive. Anything less would not have had the same impact. So we get I can only presume exactly what the composer heard and it moves us greatly.

It is one of Nyman's very best works. It cannot work as background music so if you get this plan to listen and ride the waves of grief and loss it so convincingly communicates to us. Bravo!