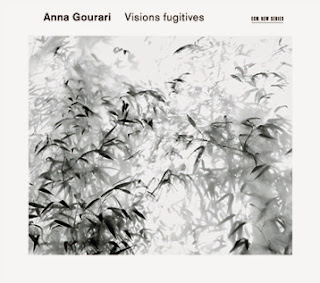 The mid-19th to early-20th centuries were in many ways the golden years for solo piano music of a thoroughly poetic pedigree. Beethoven set the bar high in his piano sonatas and the rest followed. Anna Gourari has a deep sense of those poetics and conveys to us how they lay out with three paradigmatic works on her album Visions Fugitives (ECM New Series B0017622-02).

This is her second ECM album, following on the triumph of her first (type her name in the search box for my review of the earlier one).

Prokofiev (1891-1953) provides the centerpiece of the program with the early modern masterpiece Visions Fugitives, a 20-movement, widely shifting series of "fleeting visions" that capture a world of sensation and substance, from the sound of peeling bells to the sound of the harp, in contrastingly varying moods from gentle to sarcastic, typical of Prokofiev the melodist and creator of churning mobile structures with real life. It is a work at the center of the modern Russian School and Gourari's gifts bring the music to us in the most sensitive, atmospheric terms.

From there we get a brief chestnut from Nicolai Medtner (1880-1951), his "Fairy Tale in f minor," three brief minutes of dark charm.

And to conclude the program we have Chopin's monumental Sonata No. 3 in b minor, op. 58. He was the composer who did so much to expand pianistic poeticism in his lifetime (1810-1849), paving the way for Liszt and the Russians who followed, crafting an expressive language that in many ways is still with us. Gourari tackles the complex master sonata with fire and reflective whimsy.

Gourari triumphs on this program. She handles difficult technical parts with a speech-like continuity that flows the music wonderfully well. The Prokofiev has all the mystery and movement we could ask for. She understands his at times eccentric evocative moods and gives us a reading that glows with freshness. The Chopin has a weighted depth of feeling that neither under nor overplays the sentiments so nobly and fully, pianistically expressed.

In every way Anna Gourari brings us her brilliant interpretive skills. The Prokofiev sings, the Chopin reverberates. A beautiful recital!