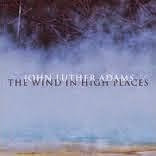 John Luther Adams creates music than is more than just imaginative. At times it is pure magic. I named his orchestral work Become Ocean as the "Best Modern Classical, New Music" Record of the Year for the rapidly waning 2014 (see the December 12th, 2014 post on this blog) because it was that...magic. Maestro Adams has successfully, brilliantly managed to give us a modernism (or a postmodernism if you will) that is radiantly representative without being programmatically literal, tonal without being classically sequential, rapturous without direct reference to human or cosmic agency--a music without myths, without much in the way of extra-verbal textuality, with affect but without discernable human intent.

He does something like this again with his new album, The Wind in High Places (Cold Blue 0041). It is some enthralling music for string quartet (JACK Quartet) and for cello orchestra (the Northwestern University Cello Ensemble). There are three works presented in all.

First up is the title piece, "The Wind in High Places." Adams conceives of the string quartet as a sort of 16-stringed wind harp for the three movements that comprise the work. Through open strings and harmonics a varying canvas of aetherial, primal voicings come at us in varying degrees of density and intensity, all representing the wind in natural settings. It has an uncanny tonality that through sound color recreates nature in all its ebbs and flows. The music is striking in its almost primitively elemental, yet vividly natural color.

The most sonorously astounding of the three works surely is the four-movement "Canticles of the Sky." On it are 44 cellos. They create a world of their own, as limitless and even as breathtaking as the sky panoramas they depict. This, as in the other works here, is not thematic in any conventional sense. "Canticles" presents open sounds as variable but then too as unified in expression as drifting clouds. The music creates analogies of vast expanses in space, and like "Become Ocean" they ebb and flow, flux and disperse in ecstatic singularity. There is an ever-shimmering harmonic fundamentality of fourths and fifths and added notes, a stunning largo ground without so much foreground as continuousness. It captures the imagination with a real grandeur that like its subject acts as a benevolent force of nature.

"Dream of the Canyon Wren" returns to the string quartet for a piece that emulates the call of the Canyon Wren, familiar to the composer as a fellow inhabitant of his desert home. It is an evocative work that concludes the program on a positive note. It may not be quite as astounding a piece as the two preceding it, but it gently cradles us and brings us back down to earth in a way most fitting.

This is a beautiful recording with music that enchants. John Luther Adams gives us some of his most intimate music on this one. Is communicates directly and with sublimity.