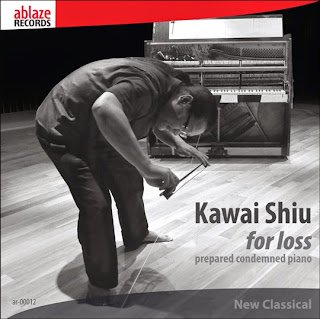 As much as this is my first post of the year I'd like to wish everybody success and happiness in 2015.

Today's post looks backward slightly to 2011, when a mammoth earthquake and tsunami hit Japan with a devastating blow. Composer Kawai Shiu was out of the country at the time but very much moved by photographic images of one of his colleagues (who was engaged in the work of cleanup and restoration) on a beach playing on a badly destroyed piano which had washed up with other debris in the wake of the cataclysm. It very much affected Shiu as a kind of symbol of the havoc wreaked.

In time he envisioned creating a work that dramatized the horror and grief he felt in concrete, performative terms. For Loss (ablaze 00012) gives us the music as he imagined it. It is for what the composer calls "a prepared condemned piano." Shiu set about to find a piano that was in as similar a state of extreme disrepair as the one that washed ashore. As you can see from the cover picture, the keyboard and strings are still there, but that is more or less all.

Shiu's work presents 19 sections that employ various means of sounding the damaged instrument, from playing on the carefully detuned-retuned strings in the conventional way to getting inside the strings with various objects, strumming and hitting them and, as again you can see from the cover, bowing a string that had become detached. I don't have the details on further preparation but the sound of the work tells us that there was a fair amount of it.

It is a kind of ritualized representation in sound of all that was lost in the disaster. It is more contemplative and sound-color oriented than it is expressionist. It in a way seeks to restore nature as a creative force, to make a mournful but ultimately positive musical statement about making good with what is left.

It is music of an otherworldly cast, paradoxically built from the ruins of the present to create what sounds like music of some ancient rite. Yes, there is great loss expressed in the work, but there is the transcendence of re-creation.

The work fascinates in its stark ritualized action. The more one listens, the more one gravitates toward the sounds so well thought-out by Kawai Shiu. It has a one-of-a-kind quality that is in the end a tribute to the bravery of those who got through the upheaval and surged forward to rebuild their lives.

In that, it is a work highly representational. All sounds have meaning yet are singular within themselves. Hearing is a moving experience. Listen!