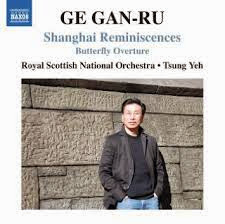 Contemporary orchestral music runs a gamut of styles. Today we get a sort of neo-romantic programmatic music with pronounced traditional Chinese elements entering into the mix. Ge Gan-Ru (b. 1954) is at center-stage for the two-work CD Shanghai Reminiscences (Naxos 8.570609).

He was born and raised in Shanghai and now lives in the New York area. He apparently has written music in an avant mode but now turns to something mostly more conservative for the lengthy "Shanghai Reminiscences" (2009) and the briefer "Butterfly Overture" (2012).

Frankly, my first hearing of this disk was somewhat dismissive. The longer work follows on the path of an autobiographical tone poem about growing up in Shanghai. This is quite a bit more programmatic than what we are used to hearing nowadays, a sort of "Hero's Life" only even more literal than Strauss. So each segment depicts something in various ways, the sound of birds and a Sibelius-reminiscent dawning segment (that returns in the end), practicing scales (and yes, you get scales), street sounds (car horns), brief portraits of street pedlars, the storm and stress of the Cultural Revolution, everything laid out like a movie soundtrack, some of the thematic material inventively romantic, some Chinese, some close to banal but all easy-to-digest.

The "Butterfly Overture" features a chromatic scale to depict literally the path of the butterfly.

As I say, the first hearing, though the performances are fine, did not leave me wanting more. The Chinese elements were the more interesting parts. Some of the western romantic parts left me cold. The biographical reflex-music was sequential and not perhaps structurally meaningful.

But then as I listened more there were parts that hit me as interesting, that there was here and there a real spark of something original to recognize. Now I listen with more interest than at first hearing. It should certainly appeal to those who respond well to a literal program, who perhaps need the obvious meaning guideposts to get them through a long orchestral work. And I am no longer dismissive.

If based on this I say I appreciate Tan Dun all the more as my favorite living Chinese composer, I do think that Ge Gan-Ru is worth hearing. I would like to hear his more modernist works and see what he comes up with in the future. This album I'll play again, certainly. He has a way. It's not entirely my cup of tea, perhaps, but you cannot please everybody.