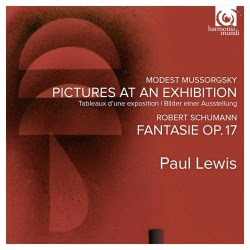 If someone were to ask you, "What is the most famous orchestration in classical music?" you would probably come up with Ravel's treatment of Mussorgsky's "Pictures at an Exhibition." It is so well done, so brilliant, that from our repeated hearing of the orchestral version it is almost inconceivable to imagine the work without those elements Ravel contributed. Yet of course the work existed for quite some time as something for solo piano only. Mussorgsky made considerable demands on the pianist who would play it. And in the face of us all hearing the work now with all the orchestral elements, it takes a special pianist, one with considerable virtuoso skills, power, and subtle interpretive acumen to make the work live as it did in Mussorgsky's mind.

Such a pianist is certainly Paul Lewis, a master who we have covered on these pages before (type his name in the search box above), and we encounter once again in full-bloom. His Pictures at an Exhibition (Harmonia Mundi 902096) is available this month, coupled with Schumann's "Fantasie, op. 17."

It hit me as I listened to Maestro Lewis's very lucid reading of the work just how bold the music must have sounded to contemporaries at the time. Romantic, very Russian, yet also filled with stridencies and at times a sort of hardness of attack that, without the orchestration to expand it, must have seemed rather unidiomatic, at times violent, furious. Looking back over time it takes an effort to hear it with fresh ears. With Paul Lewis at the piano giving the music a very poetic spin we can do this. "Ballad of the Unhatched Chicks," for example, soars under Maestro Lewis's fingers. Of course the "Great Gate at Kiev" and "Samuel Goldenberg" have that almost eccentric quality that is pure Mussorgsky. It takes a Paul Lewis to remind you and he surely does.

Schumann's "Fantasie" goes well with the Mussorgsky as contrast. It is a work that never fails to move me but in Lewis's hands it does so even more than ever. There is a turbulent, boiling quality to the work that Lewis brings to us without restraint. And there are majestic moments that in their own way parallel "Pictures."

Paul Lewis triumphs. It's as simple as that. To say I wish I played like him is the highest compliment I can pay an artist. I wish I did. This is a disk you play to your kids and say, "if you take piano lessons, maybe someday you too can sound like this." Of course someone like Paul Lewis is one in many millions or more. As such he is a model of the complete concert pianist. Brilliant!