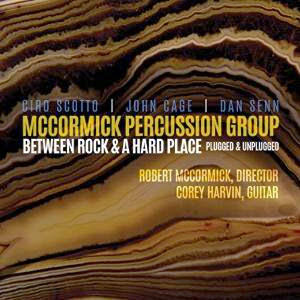 The cauldron of stylistic amalgams continues to boil steadily, giving us various blends of new music and other once very disparate styles, now combining in nearly endless possibilities. Today we have an album that features a heady mix of new music and heavy metal rock, as played by the McCormick Percussion Group on Between Rock & A Hard Place (Ravello 7898).

The centerpiece of the program is the Ciro Scotto work that furnishes the title to the album. It is a rather striking combination of heavy metal guitar (Corey Harvin as soloist), electric bass, drums and the percussion group. The music gives place to the rock ensemble and the many varied percussion instruments in equal measure. Riding the metal riffs in four movements is the electric portion of the ensemble, yet the percussion extends the music and gives it color and character it would not have otherwise. It works because Scotto finds a common ground where the music comes together. There is a second, unplugged version where guitar and bass play their parts acoustically and that too has much interest as a contrast and a very different outcome.

With the advent of the percussion group new music was dramatically liberated from conventional classical timbres. The joining of the percussion sounds with heavy metal goes to show you how liberation makes it possible to go virtually anywhere given a cohesive conception, which is certainly the case with this work. Plus metal is about striking forward, hitting notes and chords percussively, and that makes it ripe for this synthesis.

The rest of the album features works that have resonance in new music projection, but no rock elements, and that works fine as change of pace and contrast. John Cage's "Five" gets an unusual and interesting version for five players on a bowed vibraphone. Dan Senn's "Rivus" chimes in with a complementary work for celeste, glockenspiel and vibes that is about struck color, movement and tonality, and has trajectory that sets it apart as similar but different.

After the unplugged version of the Scotto work we get John Cage again with his "Composition for 3 Voices," an early work (1934), here realized for two vibes and marimba.

This in all is music that engrosses as it transcends boundaries. The McCormick group is first-rate in every way and they shine forth brightly here in a program that will appeal to anyone with an open mind. Kudos!