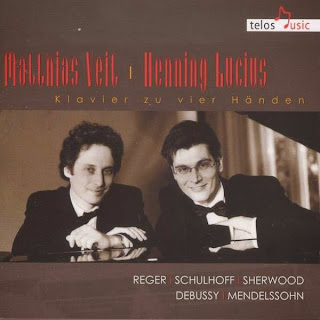 When an anthology of works contains music of different style periods, either it is primarily a showcase for the artists involved or there are similarities in the works that go beyond the periods represented, or both. In the case of Matthias Veit & Henning Lucius's Klavier zu vier Handen (Telos Music 063) it is mostly a matter of artistry. The five works presented on this disk have in common the four-hand piano configuration and the artistry of the duo, which is considerable. The works themselves do not fit neatly into either period or stylistic affinities. They do not clash, certainly. But they give you variety and show off the interpretive skills of the pianists. And the sequence of the works flows nicely, too.

Max Reger's "Sech Walzer op. 22" gives us an example of the composer somewhere between his late-romantic and his neo-classical style with brevity and charm but no sentimentality. Erwin Schulhoff (1894-1942) and his "Ironien op. 34" is a more modernistic, brittle sort of multi-part work, with a ragtime-modern final movement. Both contrast nicely.

The program moves on to Gordon Sherwood (1929-2013) and his "Sonata in Blue, op. 66" in its recorded premiere. The music uses the blues scale tonality for more classical aims, in a way like Gershwin, only not as romantic-expressive as, say, the latter's "Rhapsody in Blue." And that is well, since it convinces on its own terms.

Debussy's "Ballade" (1890) is extraordinarily lyrical and characteristic of the composer in this period. The four-hand version is especially full.

We end with Mendelssohn's "Duett: Andante und Allegro vivace assai op. 92" from of course the previous century. It is a work in every way worthwhile and quite Mendelssohnian, and a contrast to the previous music in the program in its pre-modernist charm and slightly more virtuoso stance.

The sensitive interplay of Veit and Lucius makes it all work. The Reger, Schulhoff ad Sherwood are well worth hearing in these fine renditions; the Debussy and Mendelssohn well done. In all the program has great variety, shows us five excellent examples of the four-handed art, and showcases the very musical approach of Veit and Lucius. Bravo!

Posted by Grego Applegate Edwards at 9:31 AM