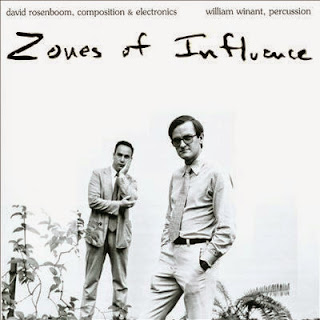 In an interesting place is a double CD set from composer-electronics person David Rosenboom and percussionist William Winant. Zones of Influence (POGUS 21074-2) gives us a world of sound mapped out by Rosenboom in 1984-85 and revised in 2013. He calls it "propositional music." By that he means a modelling of cosmic universes that may have their own brains, may evolve, have consciousness, etc. He embodies the models in musical forms based on algorithms with the ultimate result that the world initially created becomes a musical composition or series thereof.

So that is the basis for the music we hear. In the end of course what counts is that the music satisfies our own musical listening sensibilities. It does. At times it sounds like an uncannily synched concerto for percussion and virtual orchestra; other times the blend between the two worlds is less percussion-centered (especially in parts of the second half) and it becomes an overall virtual orchestral matrix with percussion a bit less central and more ensemble-oriented.

The results are exceptional. Much of it sounds very organic, thanks to Winant's vivid presence. But the spatial panning out of the music is rather otherworldly, which is of course the point. Rosenboom does indeed create his own world of sounds. They mingle together with a logic born of the algorithmic-generative specifics. In that way the music often seems less human-intuitive than is typically the case with real-time composition as we know it. Like with Cage and some of his chance-operation works, a human personality is not so up-front as is a sense of extra-human structure. The music does not sound Cage-like however. There is more in the way of synchronicity.

To say it in less fanciful ways, it hangs together remarkably well as new avant music. It fascinates with its real-virtual interface. The music content remains at all times of high interest. The musical segment for tabla tarong (multiple tuned tablas) and electrical instruments alone is worth the price of admission, but there is much more.

This is a landmark creation, a breakthrough for the melding of virtual and real-time instrumental combinations. It also is fascinating music on any terms. Very recommended.