Chris Paul Harman, After JSB-RS, Works for Keyboards and Percussion 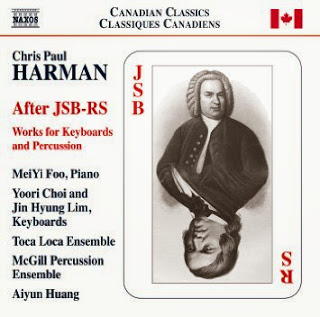 Modern works that pay homage to or utilize the music of past masters in an overt manner are not of course unprecedented. I can think of Stravinsky's tribute to Gesualdo for one. There are others. The practice goes back to pre-modern times.

The key is in the doing of course. Canadian composer Chris Paul Harman (b. 1970) transforms source materials from Bach's "Chorales" and "Two Part Inventions," and also two piano cycles by Robert Schumann on his After JSB-RS (Naxos 8.573303) in a series of five chamber compositions for piano(s) and percussion. The music that results is memorable and very interesting, modern with at times bit of a bite so to speak, atmospheric in ways that do not copy but are in the lineage of Messiaen and Crumb perhaps, and quite inventive.

It is the sort of thing where the music is so transformed that if you didn't know the sources you would mostly not notice them, so thoroughly re-thought is the music. The five works span the recent period between 2006 and 2013 and as such show the composer in a very productive mode. Central to the music is the standard piano, augmented by at times an untempered piano, toy piano, and prepared piano, which gather in various configurations in "After Schumann," "371" (this one especially vibrant in sound), and "After Schumann II." Each piece gives you a transformed coloristic palette of tones that belies their origins and creates beautiful patterns largely outside traditional harmonic-melodic classical form.

The "Concertino" from 2008 is perhaps the most ambitious, a short, four-movement work with a fascinating series of moving lines played by the McGill Percussion Ensemble emphasizing the vibrant color of bell-chime sonorities with celeste, piano and such.

"Der Tag mit seinen Licht" is one of the more stunning works. Scored for piano, flute/piccolo, clarinet/recorder, violin, cello and percussion, it uses a core motif that then extends outward into beautifully expanded continual modulation with disjointed diatonic intervals that when put together do not fall easily into a key center or linear harmonic continuity. It is based on the Bach "Chorale" of the same name. It most certainly is a joy to hear.

This disk offers up some refreshing yet rather profound sound-forms that gives us a tonality at times highly extended and always as an alternative to classical form. Most times this is music that should be accessible to many in its poetic qualities and generally sonorous result. Yet the confirmed modernist will get much pleasure following the colors and permutations. The performances are excellent, too.

Chris Paul Harman is a composer to follow. This is a great starting point.