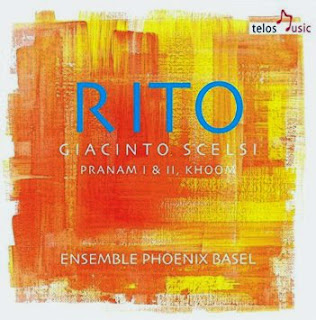 Italian avant composer Giacinto Scelsi (1905-1988) is primary known to us from the works of his second period of compositions, which began in 1952 and continued into his later years. In this period he rejected his earlier composition methods to concentrate on sound color, micro-intervals and reduced intervallic relations. His chamber and vocal works of this period are the most widely performed.

Ensemble Phoenix Basel and vocalist Marianne Schuppe give us a lively program of five Scelsi works from that period in the recent album RITO (Telos 191). Two of the five works include a vocal part, which Ms. Schuppe handles quite adroitly with expressiveness and nuance.

"Khoom" (1962), for soprano, French horn, string quartet and two percussionists is the longest work (at 22 minutes) and gives central place to the vocal part and its pivotal centering around a series of pitches, micro-intervals and use of vibrato for expressive purposes.

"Prana I" (1972) for alto, 12 instruments and tape recorder masses the largest ensemble of all the works here. It too has a very prominent vocal part and a sort of ritualistic use of limited pitches and microtonal permutations in highly dramatic, coloristic ways.

"Prana II" (1973) is a sequel for nine instruments. It uses long tones and coloristic elements to give us a soundscape even more stark than "Prana I" yet continuous with endless permutations around somewhat limited means tonally. If you speak of "minimalism" there are times where Scelsi is much closer to the visual equivalent in the art world than the composers given that categorization. Yet as here the coloristic and microtonic elements give us quite a bit of variability.

"Riti: I funerali di Alessandro Magno" (1962) has a dark cast, due in part to the instrumentation of contrabass, tuba, electronic organ, contrabassoon and percussion. Scelsi's treatment accentuates the tendency further with dramatic long-tones and a limited pallet of notes often low in the range of the instruments.

"Okanagon" (1968) concludes the program with some striking music for harp, tam-tam (gong) and contrabass that has an especially resonant sound as seemingly the strings of the harp and contrabass are allowed to vibrate against the tam-tam at key points. It at times reminds of Tibetan chants and their vibrating cymbal interludes and low throat-tone vocalizations. For "Okanagon" the sound color is vividly present and quite beautiful in a distinctive way.

I suppose that this group of works and their fine performances are as good a place as any to start with Scelsi's music if you do not already know it. And even if you do, this is a volume very much on target. His is a new music that does not aim to please as much as get inside the production of sound and its mysteries. So it's best to leave expectations behind. Any new music lover with a game spirit about travelling to unknown sound worlds will find this volume very interesting I would think. No understanding of 20th century innovations is quite complete without Scelsi. This is music of importance, very well performed.