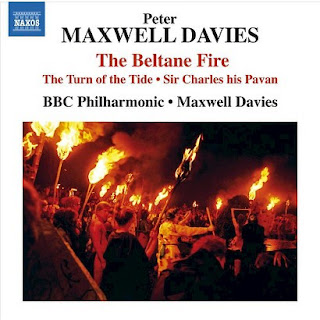 Peter Maxwell Davies (b. 1934) surely is one of the towering figures among living English composers. The systematic release of nearly all of his works (most originally on Collins Classic) on Naxos has helped me understand that.

It perhaps is in the miscellany that a composer shows his or her value across-the-board. But it isn't always fair to judge on those. If we only knew Beethoven from "The Creatures of Prometheus" we would be missing a great deal. Nonetheless it can be fascinating to explore an artist's byways.

With this in mind we turn to Peter Maxwell Davies and his recent reissue volume The Beltane Fire (Naxos 8.572362). It is indeed a volume of miscellany. This is a series of orchestral works from the late '80s through the middle '90s. It includes the ballet that never came to be ("The Beltane Fire"), running nearly 40 minutes, the near half-hour work "The Turn of the Tide," and several short works: "Sunday Morning," "Threnody on a Plainsong for Michael Vyner," and "Sir Charles his Pavan."

For all of this the BBC Philharmonic under the composer takes care of the performances, and quite respectably at that. "Tide" brings in several boys and girls choirs for a portion of the work.

There is good craftsmanship and inspiration readily to be heard here. The "Beltane Fire" has advanced harmonic modernity and a great variety of music, some obviously meant for the dance, some less so. It sounds much like the Maxwell Davies of the period, exploratory yet steeped in an orchestral expressiveness of the Maxwell Davies sort. "The Turn of the Tide" is symphonic narrative in a slightly less modernistic vein. The entrance of the choirs towards the end makes for some beautifully evocative music, rather brilliant and at times colloquial, a high point of the disk for me.

"Sunday Morning" is the expanded version of a theme for a BBC radio program. It is bright and pastoral sounding with a slightly regal cast. A little gem.

"Threnody" has a contemplative sadness and a resigned sort of quietude.

"Sir Charles his Pavane" was written for Charles Groves, the conductor who championed Maxwell Davis early on. It continues the quiet mood with well conceived parts for brass and strings.

That pretty much sizes it up. It is a volume that will certainly add to your Maxwell Davies appreciation. If it does not form the capstone of his works from this period it does provide an absorbing diversion. This would be by no means the first to get of his many volumes now on Naxos, but it is quite contentful nonetheless.