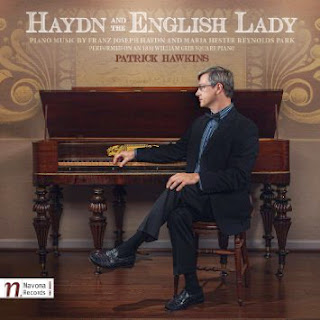 Classic era solo piano music has a certain self-contained quality. It seems to reach a little less into the future and back into the past as compared with the flowering of romantic and even modern piano music. It occupies its modest world with undeniable charm and lightness of being. Or at least much of it seems to. That doesn't mean we should dismiss it or not get to know it, of course.

It helps sometimes to hear the music on a period instrument, in that the sound is less projective, more intimate, more in keeping with a performance less "stagey," with fewer people in attendance, sometimes just the pianist alone to hear it.

With this is mind let's take a look at new new disk of piano music from that era, one with some decided differences than standard. I refer to pianist Patrick Hawkins and his Haydn and the English Lady (Navona 5981). We have a selection of piano music by Haydn and the rather unknown composer Maria Hester Reynolds Park, as played on an 1831 William Geib Square piano.

The piano has a less reverberant tone as one might expect. Its tuning in the upper register seems less tempered than a modern instrument, and that may have something to do with its age. Once one gets used to that all flows together. The Haydn is a Sonata in D Major, and an Adagio and a Capriccio. They are played quite decently and serve to set off the music of the "English Lady," Ms. Park.

Maria Hester Reynolds Park (1760-1813) was of course a contemporary of Haydn (1732-1809). She was a pianist from aged 12 to 19 for the permanent orchestra in the Music Room at Oxford. She went on to teach privately to publish a number of her works during her lifetime. That is all we need to know for the moment, for the music is what is at hand. Our disk includes three of her piano sonatas, the one in E-Flat Major, Opus 4, No. 2; the F Major, Opus 4, No. 1; and the C Major, Opus 7. In addition there is a Waltz in E-Flat Major. That and the E-Flat Sonata come to us in first recordings.

We certainly gain a good view of Ms. Park from these performances. The themes are very appealing, the music well-crafted. She may not have the grandeur and profundity of Haydn, but how many come close to him in that era? A very few. She holds her own nonetheless.

Hearing the more familiar Haydn on the period piano gives you pause. He is not diminished by the intimacy of the instrument. The singing melodies still sing. The passagework has less presence though and so the thematics stand out all the more. The same might be said of the Park pieces, though I have never heard her music previously. She is no slouch. The hearing of her work is much to our benefit and this CD gives us a sort of in situ feel for her way, and for that matter Haydn's.

It is a charming disk. Thank you, Patrick Hawkins!