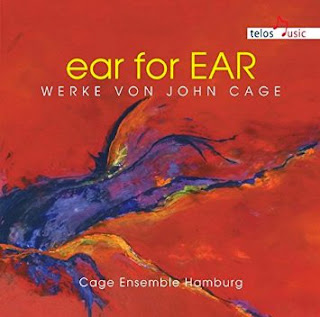 In terms of sheer sound, there is more than one John Cage. There are many. Some of his works are dissonant or noise-sound oriented; there is the "ethnic" Cage of the prepared piano pieces; there is the diatonic Cage who shows a Satie influence; and there are vocal works that have a sort of ritual diatonics. There are other Cages, too. But for now that's enough.

Cage Berlin Ensemble Hamburg has a new collection out of his music entitled Ear for Ear (Telos Music 179). It is centered around music that has as its basis a text. Most of these feature vocalizing of that text; one is a piano work that was influenced by a text.

Much of the music here has enjoyed a good number of recordings. That is in part because much of it is very accessible. Some are more rare. All are well performed in his recording.

"ear for EAR" (1983) for two voices is, as the liner notes state, similar to "Litany for the Whale" (1980) for a single vocalist, in that both have a chant-like diatonicism based on syllables. "ear for EAR" is not as often heard as "Litany" but they go together well.

"Three Songs" (1933) for voice and piano is one of Cage's first compositions. Based on texts by Gertrude Stein, it shows you a proto-Cage in a mostly diatonic vein, closer in approach to the "new music" of the time yet a thing already apart.

"The Wonderful Widow of Eighteen Springs" (1942) was especially well sung by Catherine Berberian. It has percussive parts where the singer strikes a closed-lidded grand piano with his or her hands. It has an ancient Asian ritual feel with text from Joyce's "Finnegan's Wake." On Berberian's untimely death Cage wrote a very brief sequel to the work in her memory, "Nowt Upon Nacht" (1984), which is more dynamic but based on the same premises. It is good to hear both works together.

"ASLSP" (1985) for piano solo is also based on "Finnegan's Wake" but is purely instrumental. It has eight brief movements and is more typically jagged in Cage's abstract style. It has a quietude though that makes it fit in with the program well.

"The Year Begins to be Ripe" (1970) is based on Thoreau and very briefly follows in the ritualistic mode of "Widow."

The last work represented here is "Experiences 1 + 2" (1945-48), which maps out for two pianos his more "ethnic" pentatonic style and has a sung part based on the poetry of e e cummings.

That is the run-down on what you will hear. The vocalists and pianists give us beautiful versions of the pieces, perhaps a bit more reverent and earnest and perhaps also a little less "new agey" as some recent versions of this music. And then you also get some rather rare pieces.

This is the "mellow" Cage that potentially appeals to a very wide audience. But it is hardly for that bits of fluff. This is as serious as any Cage work is in intent. The sound is melifluent in at times archaic ways but always intriguing. Cage Ensemble Berlin give us this music with real devotion and focus. And so the results are rather outstanding.