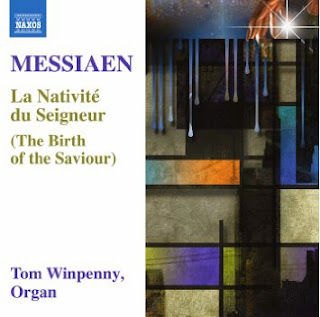 My own personal list of the best organ composers of the 20th century would place Messiaen at the very top. I am not alone in that feeling. He left us a body of organ works like no other. His combination of spirituality, his keen sense of what the modern cathedral organ can do and his compositional brilliance make for striking music that is modern yet partakes in the grandeur of the French Organ school as beginning with Franck through to his era.

La Nativité du Seigneur (The Birth of the Saviour) was one of his comparatively early works, written in 1935, yet it is also a masterpiece. There have been a number of recordings. Tom Winpenny gives us a new one (Naxos 8.573332). Along with the great Naxos price, this version is an excellent one. The old Candide LP anthology of organ music played by Reynaud if I am not mistaken included the final movement of this work. It introduced me like so many others of my generation to Messiaen's organ music. Judging by that movement alone Winpenny is very competitive. And based on my ears alone the rest of the performance is sensitively and passionately realized, very much characteristic of what Messiaen should sound like.

The work in its entirety is filled with color and contrast, mystery and triumph. Like any of the major Messiaen organ opus works it is "spooky" in its way, modern in ways often typical of early Messiaen yet with a special feel for how the organ can envelope listeners in a world of sheer sonic sensuousness.

I would not hesitate to recommend both the composition and Winpenny's performance. In fact I entirely do. Any student of 20th century organ, of Messiaen, or of modernism in general should have it. I am glad for it myself!