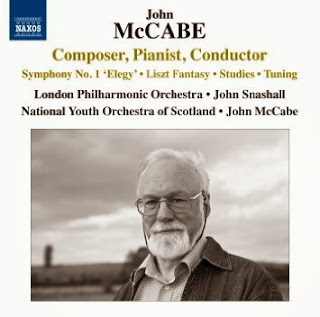 English composer John McCabe (b. 1939) makes music with a very personal stamp, modern sounding yet in a continuity that suggests earlier styles without seeming neo-classical. I came across his Visions, Choral Music and posted positively on it here last December 14, 2012. Now we have a goodly assortment of works in a new anthology composed of recordings originally released on LP or cassette and now for the first time joined together on a single CD.

Composer, Pianist Conductor (Naxos 8.571370) gives us an orchestral work and solo piano music composed between 1965 and 1969, then closes out with an orchestral work from 1985. As the title suggests McCabe is the pianist for the three solo piano works included, which are "Fantasy on a Theme of Liszt" (1967), "Capriccio (Study No. 1)" (1969) and "Sostenuto (Study No. 2)" (1969). All three works are dynamic, dramatic and occasionally call for a virtuoso ability that McCabe delivers quite readily. They have substance and dash. The Liszt "Fantasy" sounds like a potential classic.

Then there are two orchestral works, his "Symphony No. 1 'Elegy'" (1965) and "Tuning" (1985), the latter with McCabe as conductor of the National Youth Orchestra of Scotland; the former with John Snashall conducting the London Philharmonic.

"Tuning" makes use of a large orchestra for a kaleidoscope of modern tonal color soundscaping with mystery and texture. It shows you a very adventurous side of McCabe that pleases while orchestrationally giving off a brilliance that makes you wish there was more like it. Another CD? The Youth Orchestra may not be the Vienna Philharmonic but they give us a clear idea of the work.

His "Symphony No. 1" has three movements and an evocative quality a bit less avant than the later work but very well conceived and compelling in any event. Once again his orchestrational creativity comes to the fore.

Altogether this anthology gives you much to appreciate. It presents you with a snapshot of a composer we would do well to hear more from. Recommended for completists in the new music contingency but also for those a bit less avant-oriented, as the music fits its own world that partakes of 20th-century tradition and avant qualities equally and satisfyingly. Here is an English composer of merit.