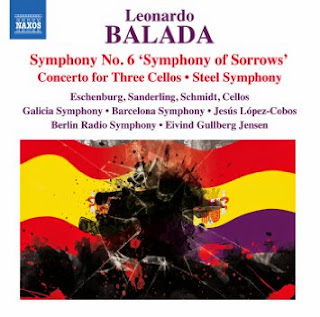 Looking back to the experience of his music through the years, there is something about Spanish composer Leonardo Balada (b. 1933) that now hits me. That is, that I've enjoyed just about every orchestral composition I have heard of his, yet in the end I do not have a clear feeling for what to expect from him stylistically. Part of that of course is that his music continues to evolve and change.

The new Naxos release of orchestral works is a case in point. It features his Symphony No. 6 "Symphony of Sorrows" (Naxos 8.573298) (2005), a "Concerto for Three Cellos and Orchestra, 'A German Concerto'" (2006) and his "Steel Symphony" (1972). The first two works enjoy here their world premiere recordings.

The composer himself remarks in the liner notes that a key to his music is his use of avant garde techniques to forward emotional expression. That does help to explain in part. And you can hear that pretty clearly in these three works.

"Symphony No. 6" is in remembrance of the innocent victims of the Spanish Civil War. It begins with a rather anguished expression by the orchestra, then takes up an almost martial rhythm that is tonal and polytonal at once.

The "Concerto for Three Cellos" features Michael Sanderling, Wolfgang Emanuel Schmidt and Hans-Jacob Eschenburg in the expressive solo roles. It too begins expressively, then segues into poly-tonal music that has a regular cadence, perhaps also march music that is both avant and banally carnivalesque, "folksy." It concerns the long path of reconstruction in Germany after two disastrous wars and an evil dictatorship.

The earlier "Steel Symphony" (1972) gives us Balada's impressions of Pittsburgh as a result of his residency there. It is a vibrant work that represents the turmoil and bustle of the steel factories and does it well. It is a molten cauldron of sound at times, fittingly expressing with brilliance the full tilt of production.

For those first experiencing Balada this may not be the ideal recording. Perhaps the Naxos recording of the "Caprichos No. 1 & 5" (see review of March 14, 2012) would be better. Nevertheless the three works represented in this new release intrigue and expand our appreciation of Balada in worthwhile ways. The "Steel Symphony" alone is worth hearing. But the newer works open up vistas for us as well.