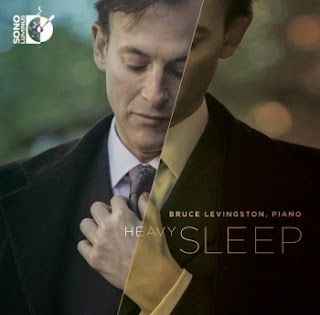 The right pianist with the right imagination can fashion a program that is very...right. Pianist Bruce Levingston has done this vividly on his album Heavy Sleep (Sono Luminus 92183). What we have in the artist's vision is a series of piano works where "each relates either directly or spiritually to the theme of death, rebirth, or both," to quote the pianist from the liners. Every work also refers obliquely or directly to other composers and/or their own works. The idea is that "together, these works offer a touching perspective on the close spiritual connectivity we all share as artists and as human beings, culture to culture, past and present."

This germinating set of ideas gives Levingston the inspiration to make the music express deeply. It is a pianistic monument in its own way to the ideas and composers involved.

Two modern works serve as bookends to the music of Bach himself or his music as represented in piano transcription. It begins with Timo Andres' "Heavy Sleep," then proceeds to the Bach-Reger "Chorale Prelude in B Minor," the Bach-Siloti "Prelude in B Minor," continues with a Bach Prelude and a Fugue, both also in B Minor, his "Chromatic Fantasy in D Minor," a Fugue in D Minor, Bach-Kurtag's "Gottes Zeit Ist Die Allerbeste Zeit" and finally Mohammed Fairouz's "El Male Rachamin" in memory of Gyorgy Ligeti.

I won't give you a blow-by-blow description of the music here. Suffice to say that Levingston makes of the Bach something entirely contemporary seeming and/or brings out the linear baroque qualities of the modern works. Levingston makes all flow as one by his sheer pianism and his abundant interpretive instincts.

The new works (in their recorded world premieres) are significant and deep, and share with Bach an ingenious overarching sense of the drama of intensely realized inner workings. Bruce Levingston is a pianistic poet of the highest sort. The disk fills you with the wonder of music and how it can express some of humanity's most profound concerns.

I recommend this one to you without hesitation. It is a winner on every count.