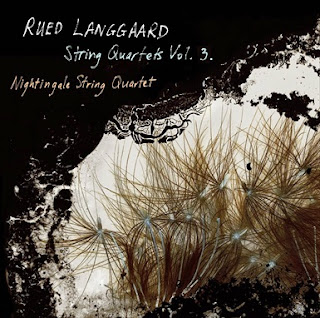 Some composers are enigmatic. You need to come to them on their own terms and forget about expectations. Such a one is the Danish Rued Langgaard (1893-1952), who countered the modern doings of contemporary Carl Nielsen by remaining in the realm of a late romanticism that was as much personal as eclectic. He was at odds with his times and consequently was not given much attention until years after his death.

These days he is getting something of his due. A prime example of that is the Nightingale String Quartet's acclaimed recordings of the complete quartets in three installments. I have been listening to Volume Three (DaCapo 6.220577). I missed the first two but this one tells the story well. It includes the first and fifth quartets. All the quartets are youthful works written in a concentrated span beginning in 1914 when the composer was just 21. The first was revised in 1936 and enjoys its first recording here. The fifth was written in 1925 and revised between 1926 and 1938.

All the quartets were apparently inspired by a hopeless love affair he had during the summer of 1913. They are filled with longing but not sentimentality so much. You can hear the influence of Beethoven, Schumann and Brahms in the first and fifth quartets, but then something else as well, something Langgaardian.

Both quartets show real craftsmanship and inspiration. The Nightingale Quartet do a splendid job bringing out the drama and nuances of the works and in so doing go a long ways in helping you forget his out-of-time stance. In the end it doesn't matter how his music should have sounded in his era. This is music written out of an inner necessity more than a stubborn refusal to move with the times, or so it sounds to me. As a bonus we get a very short scherzo movement the composer set down in 1950. And then there is silence.

The music and performances together make for a very rewarding experience, beyond what you might have expected, yes, but in every way worth immersing oneself in. The Nightingale Quartet take to these works with clarity, passion and the best kind of four-way dialoging. Bravo!