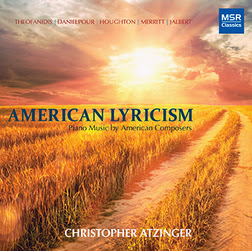 Today is Boxing Day in some places. Happy that to those who participate. Here in the USA it is simply holiday season Friday--but also Kwanzaa! I have dutifully gotten myself out of bed at an early hour to write up my customary reviews. Today we have an interesting anthology of American post-past piano music by Christopher Atzinger, appropriately titled American Lyricism (MSR 1534). On it are five compositions by living American composers writing in a lyrical, tonal vein.

Essentially, then, we have works of the present century, lyrical, poetic, somewhere between post- and neo- in that they at times hearken back to a sort of impressionism but also sound fresh and contemporary. Danielpour includes a "Winter Solstice" movement in his Preludes so we are also timely.

I won't try and run down each work. They fit together by virtue of being expressive and tonal (and at times chromatic) without being romantic, they are poetically played by Christopher Atzinger, and they have both lively and contemplative qualities, depending on where you are on the program.