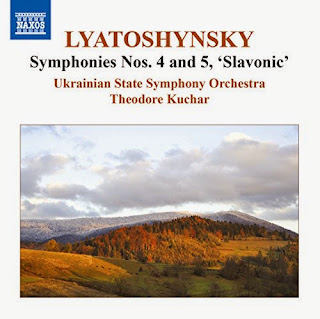 Boris Lyatoshynsky (1895-1968) is considered the father of modern Ukrainian classical music. He wrote five symphonies during his active career. They were recorded by the Ukrainian State Symphony under Theodore Kuchar and released in three volumes some time ago on Marco Polo. They are back in print on Naxos now. I covered the second volume here (Symphonies Nos. 2 & 3) the other day. I am back with the final volume, containing Symphonies Nos. 4 and 5, "Slavonic" (Naxos 8.555580).

I am happy to say that whatever reservations I may have had about the middle symphonies I do not have for the final two. The Ukrainian organization under Kuchar once again give us spirited readings, and this time thematic elements stand out in memorable fashion. Both were written late in Lyatoshynsky's career (1963 and 1965-66, respectively) and show a deft combination of expressive tonal modernism and Ukrainian folk elements. The way Lyatoshynsky puts all of it together shows the stamp of originality. There is no mistaking this music for somebody else's.

There are moments of dramatic upheaval, such as the opening movement from No. 4, reflective moments, generally in the inner movements, and some great thematic elements, such as the infectiously jaunty dance-folk motive taken up in the first movement by the orchestra as a set of developed variations and reprised more literally on chimes in the finale of No. 5.

It is music that makes its mark on your listening mind as it shows a mastery of the orchestral idiom. This is Lyatoshynsky at his best. Any Slavophile, anyone interested in Eastern European modern music will find this disk both very enlightening and enjoyable.