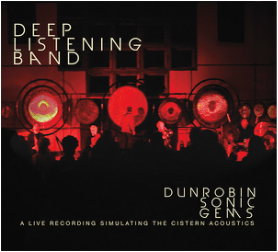 There are improvisatory outfits that engage in a fully improvisational approach who nevertheless form in the main a part of the new music covered on these pages. AMM and MEV are well-known outfits who became known especially in the '60s. Another is the Deep Listening Band, who celebrated their 25th anniversary in October 2013 with a concert in Ottawa that is now out on CD as Dunrobin Sonic Gems, subtitled "A Live Recording Simulating the Cistern Acoustics" (Deep Listening Institute 47-2014). A word of explanation: the original Deep Listening album was recorded live in 1988 inside the Dan Harpole Cistern, a remarkable acoustic environment that naturally produces sustained reverberations of 45 seconds. That acoustical environment is electronically recreated for this concert by Jonas Braasch. This recording reproduces what was heard at Dunrobin Sonic Gym. It is a performance of the band's work-in-progress, "Sonic Gems."

The two key members of the band over the 25 years of its existence are composer-accordionist Pauline Oliveros and trombonist-composer Stuart Dempster, both names that should be familiar to anyone who listens to new music in any depth. David Gamper was a third long-time member who passed away, sadly, in 2011, for whom the recording is dedicated.

The band includes a number of guests in Jonas Braasch on saxophone in addition to the acoustic modelling, Jesse Stewart on percussion, Johannes Welsch on gongs, and IONE on opening incantation.

Though there is collective improvisation as an important part of this music, it is guided by the sorts of sounds that work in such an extraordinary acoustic world. How much is generally pre-planned I cannot say, but most certainly the heightened musical instincts of the band play a key part, and also that the music has a definite flow to it that implies structural elements, in whatever way they may be realized.

In the end you surrender to the magic of the musical world created and let it envelop your senses. The long sustains allow the music to blossom forth with sound that is remarkably full at times for the size of the ensemble, at other times there is a sacred, intimate quietude no less captivating. In any case "deep listening" between the musicians and between the band and the audience, which includes us, is maximized in ways that make one feel a part of something cosmically larger than what one experiences in ordinary life.

The original 1989 recording in the cistern set the tone for the music we hear. Some 25 years later the sounds continue to grow in a profound sense.

This is music to take you both inside and outside your normal plane of being. It is more than just ambient. It is cosmic.

Posted by Grego Applegate Edwards at 6:41 AM