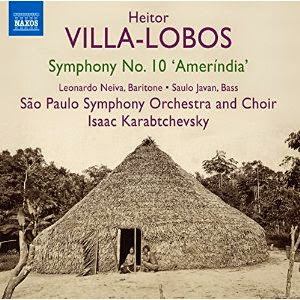 Heitor Villa-Lobos (1887-1959) and his music towers over the modern musical creations of South America as Brazil's greatest composer to date, the father of modern classical Brazilian music, a genuine original who speaks to us today directly and satisfyingly. His symphonies are not very well known. There are twelve in all and the Sao Paulo Symphony under Isaac Karabtchevsky plan to record them all for Naxos. Several volumes are already completed (type in his name in the search box above for coverage here), the latest a rendering of his Symphony No. 10 "Amerindia (Sume, Father of Fathers) (Naxos 8.573243). It was written in 1954 to commemorate the 400th anniversary of the founding of Sao Paulo.

It is a spectacular work of great sonic impact. The Sao Paulo Symphony Orchestra and Choir and the soloists in Leonardo Neiva, baritone, and Saulo Javan, bass, create a complex mosaic that exemplifies late orchestral Villa-Lobos at his very best. It is symphonic, yet at the same time an oratorio about the origins of the area and its early history, dealt with somewhat impressionistically but in ways totally characteristic of the later musical language of the master.

So we have the region enveloped in a state of nature, the rise of indigenous residents, the local Indians, the mythological pre-Columbian hero Sume revered by the Tamoyo, the appearance of the legendary Jesuit priest Father Anchieta and on from there.

This recording is based on a new critical edition of the symphony put together by Max Eschig for Criadores do Brasil.

The music itself reminds me most pleasingly of Villa-Lobos's later work of this period, Forest of the Amazon, originally intended as the soundtrack for the movie version of "Green Mansions" but only partially used. Like that wonderful work the Symphony No. 10 has Villa-Lobos envisioning a primal past of nature and indigenes, a choral fantasia that alludes to music of the ancient past in impressionistic ways, phantasmagorias of choral and orchestral dramatics that tend to have lively rhythmic-seismic shifts and motion. Like that work we feel the touch of the master symphonist transforming raw material influenced by his brilliant instincts into a sprawling, complex tapestry of vivid sound color and affect.

Of all the Villa-Lobos symphonies released thus far on Naxos this one stands out as a major work, a living entity of wonderful sound.

I cannot comment on how this new recording stacks up against previous ones since I have not heard them. Nonetheless I can say that Karabtchevsky and company leave nothing to be desired in their broad sweep and massive impact. It is a moving performance of a work that stands among the tallest orchestral trees planted by Villa-Lobos in his very productive lifetime.