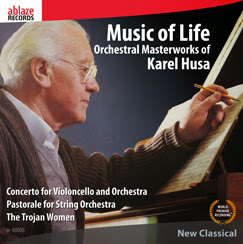 Karel Husa is a name I've heard mentioned over the years, but I must admit I have not experienced much of his music to speak of until now, aside from a few examples on Louisville Records. He was born in Prague in 1921, studied with Honegger and Nadia Boulanger in Paris, came to the US in the early '50s and has resided here since, teaching at Cornell and Ithaca for many years. He won the Pulitzer Prize in 1969 for his "String Quartet No. 3."

Impressive credentials, to say the least. His music lives up to expectations. A fine recording of three orchestral works is available as Music of Life: Orchestral Masterworks (Ablaze 00008). They show a fully modernist mastery of orchestral forces and a keen inventiveness. The world premiere recordings of his "Concerto for Violincello and Orchestra" and "Pastoral for String Orchestra" are included, along with "Scenes from The Trojan Woman."

The "Pastoral" is short to the point of terseness, but engaging. The other two works are more boldly modern and dynamically enthralling with their dissonances and orchestral fireworks. This is music outside the fractured realm of Darmstadt Serialism, more sequentially unfolding and A-to-B in syntax.

The "Cello Concerto" has a very expressive, rather dark solo part played here with finesse and an excellent idiomatic sense by Paul York. The music bursts forth with firey orchestral colors and emblazoned climaxes.

"Scenes from The Trojan Woman" has some beautifully buoyant percussion and extraordinarily apocalyptic orchestral passages that show you the Husa of vivid contrasts.

All three works are impressive and the performances by the University of Louisville Symphony Orchestra under Kimcherie Lloyd sound great.

You modernist-leaning listeners out there will find this one an exemplary introduction to orchestral Husa. It is a rather blazing tribute to a composer who clearly deserves more recognition. Recommended!