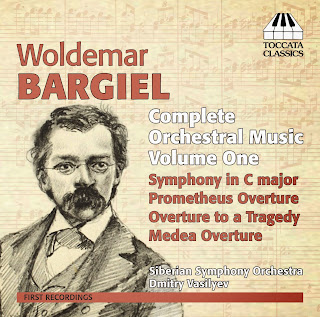 Toccata Classics, in its continuing mission of unearthing forgotten composers from the last few centuries, gives us a romantic that has suffered near total oblivion after considerable fame in his lifetime, one Woldemar Bargiel (1828-97), the half-brother of Clara Schumann. He appears before us with a symphony and three overtures in the inaugural Complete Orchestral Music, Volume One (Toccata Classics 0277).

The Siberian Symphony Orchestra under Dmitry Vasilyev gives us quite credible and dynamic readings of the works. They are firmly in the romantic mode of earlier Beethoven, Schumann, perhaps a hint of Mendelssohn, and perhaps Brahms. The music is well put-together and lively. He sounds rather totally of his era in that the tenor of these works initially merges with those of his contemporaries on first hearings. This style, you could say, was as much his as theirs. The uniqueness of each work takes some time to discern but it is generally there, nothing radical or eccentric mind you, but the music holds its own after repeated listenings.

The overtures in keeping with the era are more like single symphonic movements than medleys of contrasting thematic blocks in the preludian fashion of the earlier period. There is nothing second-rate about any of these works. If he was content to synthesize the existing stylistic tendencies rather than boldly set off on a radically original path of his own, we must accept that and appreciate the quality of the music he produced.

Dean Caceres in the liners calls him "one of the best German composers of the middle of the nineteenth century." The first volume works date between 1852 and 1864, so we certainly get a middle-century view of the composer. Further volumes I presume will cover his later output, which apparently moves a bit closer to Brahms yet retains a neo-classic balance of form and feeling. The works of the first volume one can presume contain the works that made his reputation then. Caceres notes that the music encyclopedias of the 1870s generally give him the long write-ups of a composer of importance. After that we can presume his star gradually faded in the concert public eye to the point today where we know nothing of him.

This new release provides us with a clear snapshot of his first flourishing, with all works presented in their premiere recordings. It will be fascinating to those especially keen on the era but nevertheless also will give the classical-listening generalist music worth hearing for itself. In that I do not hesitate to recommend the disk for those who welcome new music from this period. It does not disappoint.