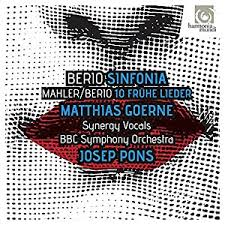 Luciano Berio's "Sinfonia" was composed in 1968-69 to commemorate The New York Philharmonic Orchestra's 125th Anniversary. It was scored for the orchestra and eight amplified voices. The original version was in four movements and its first recording came out shortly after its premiere with the Swingle Singers and the  NY Philharmonic under the direction of Berio. This was the version I heard repeatedly and internalized. The vocalists spoke, shouted and sung, primarily quotations from Levi-Strauss' "The Raw and the Cooked" but also some Beckett and directions from Mahler's scores, among other things. The orchestral part was a wealth of quotations, especially from Mahler's 3rd "Resurrection Symphony" as well as dissonant original music. I listen to the work repeatedly, but did not exactly "get it."

Some 47-odd years have gone by. There have been other versions that included the new 5th movement but I missed them. Now we have a new version with Josep Pons conducting the Synergy Vocals and the BBC Symphony (Harmonia Mundi 902180). Most notably it is paired with Berio's orchestrations of early Mahler songs "10 Fruhe Lieder," which Berio set in 1986 and 1987.

Since the songs, some in particular, inform Mahler's 3rd Symphony, hearing all of this together on one CD mutually illuminates both works and Berio's music thinking at these critical junctures--and give us something to think about the middle-early Mahler, who himself was synthesizing his earlier musical ideas and those of the Vienna which was so much a part of his life at the time.

The "Fruhe Lieder" features the wonderful baritone of Mattias Goerne, the exceptional songs themselves and Berio's subtle orchestrations. They make a perfect prelude to the "Sinfonia," which in this performance following the Lieder makes more coherent Berio's project. The role of the "amplified" voices, in contrast to the final mix of the original recording by Berio, is not so out front, but more of an element in the great collage that is this work. The words become less critical, the music more symphonic as a whole.

In the end, Pons treatment of both, the sequencing and the overall blend is very satisfying. Partly too, this post-modern collaging is more familiar to us, both in what has come after but also in works like Cage's "Variations IV" (1963), which is an indeterminate orgy of collage that broke all the rules as only Cage might have done at the time. We have had time, some of us, to come to accept the challenge of that work via the original recorded version by Cage and Tudor. And of course as we grow older along with the modern art/visual version of such things it seems more inevitable and natural. It releases us to hear the "Sinfonia" anew.

The time for the "Sinfonia" has come, from an audience perspective but also from the viewpoint of Josep Pons and his very satisfying version.

Posted by Grego Applegate Edwards at 6:29 AM