The Sun Most Radiant, Music from the Eton Choirbook Vol. 4 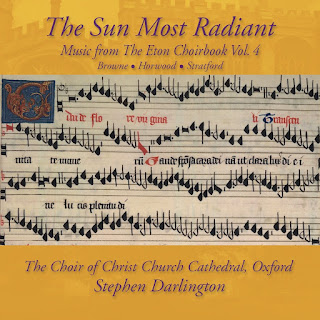 The music for the Eton College Chapel Choir in the England of the early 16th century is a wondrous thing in the hands of the Choir of Christ Church Cathedral under Stephen Darlington, at least as heard on The Sun Most Radiant, Music from The Eton Choirbook Vol. 4 (Avie 2359). On it we are treated to four works to be sung as part of the daily offices of the chapel. Three are first recordings.

The Choir of Christ Church is for these works a small chamber affair, as it would have been in Eaton Chapel. They have a vibratoless radiance and a projectively heavenly sonance that seem perfect for the music. The grouping of voices ranges from SATBarB and TTTBarb B on the two versions of John Browne's setting of "Salve regina," SATTB for William Horwood's "Gaude flore virginali," and TTBarB for William, Monk of Stratford's "Magnificat."

Stephen Darlington notes in the liners of this rewarding collection that with repeated listenings the stylistic differences of the  three composers begin to emerge. I can't say that I have not begun to hear the differences, though at this stage in my listening the masterful contrapuntal writing and exceptional performances mostly mingle together in my mind in one grand impression. But I have many listenings ahead with any luck so I look forward to that discerning stage of my ongoing ear training.

Suffice to say that this is an early music album of some sorely neglected music performed with exceptional spirit and grace. It opens up for us a phase of English choral music that has gone unappreciated for far too long.