Enjott Schneider, Shadows in the Dark 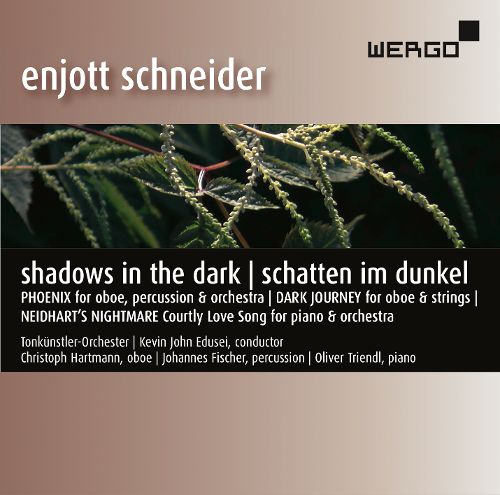 We have two concertos and a double concerto in the modern plus expanded tonal realm on today's album by Enjott Schneider (b. 1950), Shadows in the Dark (Wergo 5115 2).

"Phoenix," a mythological poem for oboe, percussion and strings, has a mysterious  beginning movement, a somewhat agitated middle movement and a finale that has a reconciliated, sturdy lyricism. Christoph Hartmann handles the virtuoso, heroic oboe part with panache; Johanness Fischer handles the equally heroic, multifaceted solo percussion part with smouldering dramatics. The Tonkunstler-Orchester with Kevin John Edusei give us a colorful, expressive reading of the orchestral part, as they indeed do on the succeeding works as well.

"Dark Journey" for oboe and strings forms its nucleus around musical fragments by Hans Rott, a neglected composer who lived in the later 19th century, wrote a forward looking symphony and died in an insane asylum, aged 26. It is a sort of psychological study in contrasts, of a man alternately balanced and unbalamced, a tragic figure.

"Neihardt's Nightmare" is dubbed by the composer a "Courtly Love Song for piano and orchestra." Oliver Triendl does the honors on piano. It is based on the popular Middle Ages minnisinger Neidhart von Reuntal, his peasant-oriented poetics and popular song style. The composer's nightmare is based on the potential outbreak of "ecstatic physicality." Movement two translates into sound Thomas Mann's description of young Hanno's "unrestrained orgy" of piano expression in the classic Buddenbrooks novel. Altogether the "Nightmare" forebodingly portrays the potentially destructive ethos contained in emotional musical excess. It is a work that contains some extraordinarily demonic, macabre passages.  Triendl and the orchestra attack the music with  the right amount of unhinged gusto when called upon to do so. It is a work one does not forget easily. Powerful.

Schneider proves himself to be an extraordinarily composer who can work with a literary, extra-musical narrative and bring the story to a vivid musical presence. These are memorable works and very lively performances to match.

Recommended!
Posted by Grego Applegate Edwards at 5:22 AM