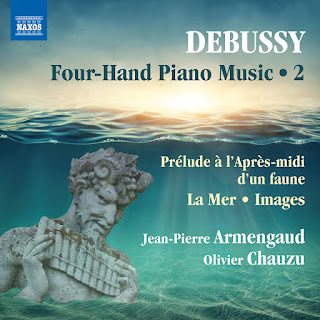 The world is still reeling thanks to the brilliance of Debussy (1862-1918) (and for that matter, Ravel). He (they) made a decisive step away from romanticism to create a modern music that presented sophisticated, evolved harmonic directions that are still with us as an assumption whenever tonality is addressed. But Debussy also had a vision of melodic form that was embedded in the richly expanded harmonic images and subjected to a pristine poeticism. Finally he took his cue from the French composers of his time to make orchestra color something ever more evolved. His orchestrations were glorious realizations of the timbral possibilities of the instruments of the modern symphony orchestra in all their various combinations, making a clean break from the strings versus other instruments that was generally so much a part of the orchestral aportionment from at least as far back as Haydn's time.

The music was dubbed "impressionism" and indeed there was some relation between the music and the way painters like Monet handled paint color and texture. And like the impressionists in the visual arts the way was paved for a world where the materials were freed from accepted conventions of a literal depiction to a new reality, a new combination and conversation between color and timbre, which of course the modern musical world drew upon, Varese through Messiaen and many others, to create the music of today.

But Debussy was more than just an important pioneer in the creation of modernity, he was also of course the creator of a body of works that gained the enthusiasm and love of listeners from his lifetime onwards.

This perhaps is a long digression from the CD at hand today, but it is critical as a background for why the current CD is revelatory. OK, so we have a second volume of Debussy's Four-Handed Piano Music (Naxos 8.573463), as played with strength and grace by pianists Jean-Pierre Armengaud and Olivier Chauzu. I have not heard the first volume but I assume what I say is true of that volume as well.

The four-hand versions of course strip away all orchestral color and substitute it with pure pianism, in the process allowing us to hear clearly the very progressive harmonic-melodic substance of the works, which was quite radical for the period and comes to us in a concentrated form so we can hear it all as if for the first time. "Afternoon of a Faun" (1894) begins the program, and it certainly sounds more daring in this version today than we perhaps have heard so many times in its fully orchestrated version, where the sensuous properties of the orchestration distract us or more properly direct us to the dazzling color of the timbres.

And so it goes for the rest of the music heard here. In the end, I feel as if I have entered another musical world, where I can contemplate the advanced fundamentals of the notes themselves.

The duo plays all with a gracious poetic sense.

So for all the reasons given I do not hesitate to recommend this volume highly. It will give you a new look at the brilliance of Debussy.