Leonard Lehrman, Joel Mandelbaum, Harmonize Your Spirit with My Calm 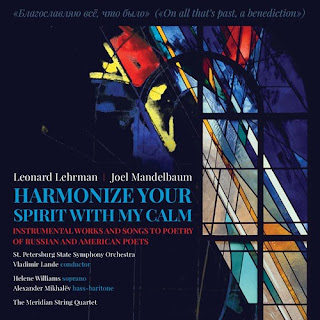 Today's album portrays the symbiosis between two American composers of Russian-Jewish descent. Harmonize Your Spirit with My Calm (Ravello 7951) is actually a line from Elizabeth Gurley Flynn's poem but aptly alludes to the 40 year friendship between composers Leonard Lehrman and Joel Mandelbaum.

On this album we have a creative  commingling of the two: Lehrman plays on Mandelbaum's "Prelude" for solo piano, Mandelbaum conducts Lehrman's "Bloody Kansas," Lehrman plays piano on the Mandelbaum's song "Love is Not All." Plus Helene Williams, Lehrman's wife, sings songs by each of them.

Both have a distinct modern style, mostly tonal, expressive, filled with the rootedness of their backgrounds yet cosmopolitan-international too at times. Perhaps Lehrman is the spirit (modernist) and Mandelbaum is the calm (neoclassicist) but it is a fully complex dialectic going on here.

We are treated to  Mandelbaum's early (1950) solo piano "Prelude," his orchestral works "Chaconne" (1977) and "In Sainte-Chapelle" (2002), the latter based on a watercolor impression of  Revelation images from the windows of that church (the painting forms the art for the cover of this album) by his wife Ellen. We then hear Mandelbaum's briskly neo-classical "String Quartet No. 2" (1962-78) and the 1950 song "Love is Not All."

Lehrman chimes in with the cycle of "8 Russian Songs" (1970-2015) for soprano or bass-baritone and orchestra, a masterful offering, followed by the miniature "Bloody Kansas" (1976) for orchestra, and finally "An Elizabeth Gurley Flynn Love Song Cycle" (1994) for soprano and piano.

So much music, well played and sung, comparing and contrasting two interrelated styles while forming a richly satisfying program in total. This is substantial contemporary fare.
Posted by Grego Applegate Edwards at 6:25 AM